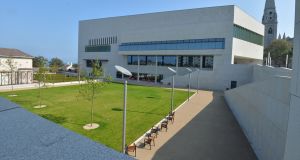 Staff from Dún Laoghaire’s Lexicon library, a €36.6 million building that provoked strong reactions and controversy during construction, are due to protest this Sunday.

Impact trade union has said its members will gather outside the library on Haigh Terrace, Moran Park, at 2pm to object to a decision by management to open the dlr Lexicon on Sundays without any library staff present.

Gerry O’Quigley, chairman of the Dún Laoghaire-Rathdown Impact branch, told The Irish Times the decision was a “provocative and premature move” by management.

“They have no library staff but added extra security staff.

“It sets a bad precedent. It could encourage this on a wider basis. Dún Laoghaire-Rathdown County Council is the latest library authority to decide to operate libraries on a staffless basis.”

Mr O’Quigley said the union and management have been involved in talks about staffing levels and recruitment in recent months but this move was done without “proper engagement”.

“Recent years have seen the numbers employed in the library service throughout the country fall dramatically, and funding has been severely curtailed,” he said.

“Existing staff are being really stretched. The union nationally has expressed its concern that the move to staffless libraries will see further staff reductions in the sector.”

“A library is not just a building filled with books. Every week, Dún Laoghaire Rathdown library staff assists hundreds of borrowers with their queries and provide workshops, facilitate book clubs and classes.”

A spokesman for Dún Laoghaire- Rathdown County Council said in response to public demand the “pilot project” had gone ahead to open the Lexicon on Sundays from 12pm-4pm since August 28th.

He said it allowed people access to borrow and return books, DVDs and CDs through self-service automated kiosks.

“The Lexicon is serviced by a facilities management team and as part of this there is a security detail,” he said.

The spokesman said people could also print, photocopy, use study spaces, get internet access and visit the art gallery.

He said “self service access” was a normal practice in many other cultural institutions.

The trade union, which represents staff in the library service throughout the State, has instructed its members not to cooperate with “staffless opening” and will be balloting its members on the issue.