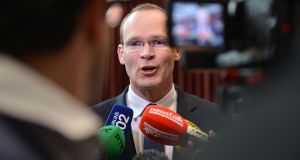 Minister for Marine Simon Coveney is opposing European Commisson efforts to appease Iceland and the Faeroe islands in the long-running row over north-east Atlantic mackerel stocks.

Three months after EU Maritime Affairs commissioner Maria Damanaki agreed to impose trade sanctions against Iceland and the Faeroese over the issue, the European Commission has sought a compromise which will end the dispute.

The commission’s proposal involves conceding almost 12 per cent of the catch of the shared migratory stock to the Icelandic and Faeroese fleets - a move which Fianna Fáíl MEP Pat the Cope Gallagher has described as an “absolute disgrace”.

The move comes after confirmation by scientists that the lucrative stock is healthy enough to justify a 62 per cent increase in the total allowable catch next year.

Mr Coveney has tabled a proposal at today’s EU fisheries council in Luxembourg which would involve a tiered system of allocating catch, based on stock levels.

Mr Coveney’s proposal has the backing of the Killybegs Fishermen’s Organisation (KFO). KFO chief executive Sean O’Donoghue said that Ireland knew how stock levels could rise and fall, and a tiered system was a more realistic way of ensuring a sustainable share-out.

The Federation of Irish Fishermen (FIF) has said that the Commission’s move would effectively reward Iceland and the Faroes for “irresponsible” behaviour in unilaterally increasing their overall share of the mackerel catch from five to 52 per cent over the last few years.

A €125 million Irish mackerel industry risks being “sold out” by the Commission, the FIF has said.

Normally, the stock is shared out between the relevant coastal states - the EU, Norway, Iceland and the Faroe islands - and these discussions are due to open in London next week.

Britain, which imports substantial quantities of frozen fish from Iceland, had been reluctant to take any action which could affect this trade.

Mr Coveney said at lunchtime today he had “made the case for a fair and balanced sharing agreement” in a bilateral meeting with Ms Damanaki, and “argued strongly against rewarding Iceland and the Faroe islands for their unacceptable and irresponsible actions in respect of the shared mackerel stock over the past number of years”.

Mr Coveney said he also met with key ministers from other member states including Spain, Britain and the Scotland’s fisheries minister Richard Lochead to press Ireland’s position this morning.

“I outlined today to the key players what I consider must be the fundamental principles for any agreement with Iceland,”Mr Coveney said.

“ Any new offer to Iceland must be jointly agreed with Norway on the basis of equal burden sharing. Iceland must not be granted access to EU waters as a part of any deal,”he said.

“ Critically, I made it clear that while any deal should provide a fair and justifiable quota share for Iceland, it must also protect the interests of EU member states like Ireland who have relied on this fishery for over 40 years,”he said.

Mr Coveney is seeking discussion at full council level before next week’s meeting in London on mackerel.

“Ireland will participate fully in the important negotiations next week in London and will do all that we can to ensure that any agreement is balanced and equitable and protects the interests of EU member states like Ireland who have such a strong reliance on the mackerel stock,”Mr Coveney said.