Council to debate 1.7km distance for wind turbines from homes 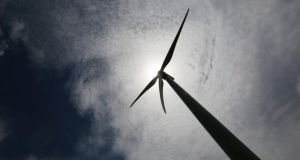 Element Power has lodged a planning application for its Kildare-Meath-based Maighne Wind Farm with the Strategic Infrastructure division of An Bord Pleanála. File photograph: Carlos Jasso/Reuters

A proposal to ensure wind turbines are not built within a a distance of 1.7km from homes is due to be debated by Kildare County Council on Monday.

The proposal comes in advance of new guidelines on “set-back distances” and other issues such as noise and light flicker which are due from the Department of the Environment.

Monday’s debate follows a planning application to An Bord Pleanála for a windfarm of up to 47 turbines with an overall tip height of 169 metres. More than 40 of them are to be located in Co Kildare, with the remainder close by in south Co Meath.

Element Power has lodged the planning application for its Kildare-Meath-based Maighne Wind Farm with the Strategic Infrastructure division of An Bord Pleanála.

The application, which includes a fee of €100,000, covers turbines in clusters covering areas of Kildare from Donadea to south west of Robertstown and around Carbury.

In Co Meath the areas affected by the turbines and site works include Moyvalley, Nurney and Johnstown, among others.

Higher than the Spire

At up to 169m high, the turbines’ blade-tip height is among the highest of the windfarms proposed for the midlands and is significantly higher than the Spire in Dublin, which is 120m tall.

Bord na Móna has said it is also considering using its lands in the midlands for wind farms.

The Maighne proposal includes the construction of foundations and hardstanding for each turbine, nine site entrances from public roads, construction of about 31km of new access tracks, an electricity substation with control buildings and some 75km of underground cabling.

The application notes that whether the windfarm would be connected to the national grid at Woodland, Co Meath, or at Maynooth, Co Kildare, is a decision for national grid operator Eirgrid.

The application has been accompanied by an environmental impact statement as well as a Stage 2 Natura Impact statement, as some of the land is in a Natura protected area.

Element Power has set up a website, maighnewindfarm.ie, to provide details of its proposals.

In advance of a decision from An Bord Pleanála on whether there should be an oral hearing on the proposals, members of Kildare County Council are expected to debate a proposal for a “set back” distance of 10 times the blade tip height.

A wind turbine with a blade-tip height of 169m would thereby invoke a set back of 1.69km.

The current figure for set back in draft guidelines issued in 2013 is 500 metres.

Independent councillor Pádraig McEvoy said he was concerned the measure, if adopted, may be outside that which is eventually adopted by government and so be set aside.

He said he was very concerned about the height of the windfarm and its effect on local houses, and did not want a situation to develop where a case against such heights was weakened because the council had overstepped national limits.