Coillte to fell 16,000 trees in major operation to control spread of the disease 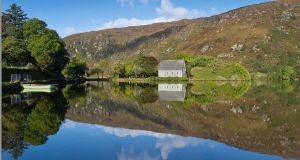 Gougane Barra Forest Park, in Co Cork,will close for approximately six months while trees are felled to control the fungus disease. The site will be replanted after the felling.

Coillte has confirmed it is to close Gougane Barra Forest Park in Co Cork for six months to allow for a major tree-felling operation after the discovery of a tree fungus attack.

According to Coillte forestry productivity manager Padraig Ó Tuama, an outbreak of the fungus phytophthora ramorum has been discovered in the popular forest park near Ballingeary.

Mr Ó Tuama said Coillte had taken the decision to fell about 16,000 trees – primarily Japanese larch – in Gougane Barra to prevent the spread of the disease. “Phytophthora ramorum is a fungus-like disease that can affect a range of trees and other plant species, with Japanese larch particularly susceptible,” he said.

“Coillte have been working closely with the Department of Agriculture, Food and the Marine to detect and prevent the spread of this disease. Regrettably, Gougane Barra is one of 20 Coillte forests where the disease has been confirmed in Japanese larch since first detected on the species in 2010.”

According to Mr Ó Tuama, Japanese larch accounts for less than 2 per cent of the Coillte forest estate, and to date Coillte has felled 150 hectares of forest to contain the disease. Mr Ó Tuama said the felling operation at Gougane Barra, where the river Lee rises, will begin next Wednesday. The site will be replanted following the felling.

The park, which is adjacent to where St Finbarr founded a monastery in the sixth century, will close for the duration of the process, which is estimates to take up to six months.

“Felling the infected trees is the appropriate measure, with the aim of preventing further spread by limiting spore production,” said Mr Ó Tuama.

“If no action is taken, the larch within the park would succumb to the disease over a short number of years and act as a source for further infection.

“Once the larch is cleared we will commence replanting with a range of different tree species, including species such as Scots pine and oak.”

In late 2002 the European Union introduced emergency measures to reduce the risk of further introductions of phytophthora ramorum.

Surveys have been conducted annually by the Department of Agriculture. Prior to 2010 the disease had been detected only on wild rhododendron bushes growing in woodlands in this country. During this period it had also often been detected on imported commercial rhododendron and other ornamental nursery stock.

Infected sites can range from recently-planted areas to mature forests. It will still be possible to process the felled timber at authorised facilities with proper precautions in place.