Cop25 in Madrid: Who will be there and what will be agreed?

‘The point of no return is no longer over the horizon. It is in sight and hurtling toward us’

US house speaker Nancy Pelosi has attended the opening of the United Nations conference on climate change in Madrid, pledging US commitment to the fight against global warming. Video: UN Web TV 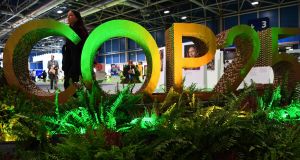 A visitors walks by the logo of the UN Climate Change Conference COP25 decorated with plants at the ‘IFEMA - Feria de Madrid’ exhibition centre, in Madrid, on Monday. Photograph: AFP via Getty Images

The annual “conference of the parties” (Cop) is the gathering of almost every country on earth on the auspices of the UN Framework Convention on Climate Change to consider how best to respond to the growing climate crisis facing the planet.

This year is the 25th gathering – hence Cop25 – which had to be relocated from Chile to Madrid due to civil unrest. The blueprint for decarbonising the world and arresting global heating is the landmark 2015 Paris Agreement.

That will feature frequently but the latest climate indicators will dominate proceedings. They prompted UN secretary-general Antonio Guterres to warn lawmakers and citizens across the world they should be wary of climate change’s “point of no return”.

He dismissed efforts by governments as “utterly inadequate” in comments ahead of the two-week conference. “The point of no return is no longer over the horizon. It is in sight and hurtling toward us.”

This gathering has to sign off on a “Paris rulebook” as the agreement kicks in from January 1st. It heralds the end of non-legally binding targets in reducing carbon emissions and adopting renewable energy. The era of wealthy countries, including Ireland, having to step up ambition on climate action is imminent.

Since Cop24, people across the world in a wave of activism have raised their collective voice in demanding politicians address the climate issue with much more urgency and end domination of fossil fuels in their economies.

Nations are equipped with the knowledge and resources to confront the changes; “what’s lacking is political will to tax and limit coal, fossil fuels, and carbon”– the Guterres verdict.

Though some countries, especially in the EU have made progress with environmental policy and committing to pledges to stop emitting greenhouse gases by 2050, “we also see clearly that the world’s largest emitters are not pulling their weight. Without them, our goal is unreachable,” he warned.

As a consequence, there will be much talk of “the emissions gap”; where countries make big commitments to decarbonise and yet are not delivering on them. In too many countries, including Ireland, emissions are rising. So much so, we are facing a 3.2 degree rise in global temperatures and sea level rise in excess of a metre this century.

Who will be there? Who won’t be there?

Cop25 will be attended by leaders from almost 200 countries. The notable absentee will be supreme climate denier US president Donald Trump. Last year, he sent low-level public servants to a make a case for “clean coal” playing its part – it provoked big protests. The US is scheduled to leave the Paris Agreement next November, if Trump is re-elected.

At least other big emitters will be present, such as China, Russia, India, and Brazil. Countries headed by climate sceptics such as Brazil (Jair Bolsonaro) and Australia (Scott Morrison) and those with big fossil fuel outputs, such as Saudi Arabia, represent the biggest block to progress.

What is Ireland’s stance at the meeting?

Ireland comes to the Cop25 table with more credibility in contrast to its “laggard” status last year, confirmed by the latest rankings in the Climate Change Performance Index.

This is primarily because of cross-party agreement on ways forward and the Government’s subsequent climate action plan. Ireland is supporting greater international ambition though rowing in a European green new deal to be unveiled shortly would be hugely demanding – some would contend impossible, given where we are at now.

Transport, agriculture and poor-quality buildings, pose an immense challenge for the Republic, which will say a booming economy means the emissions curve is going in the wrong direction.

Agriculture is especially problematic because of the sector’s undoubted ability to produce quality food at a global level, yet fundamental redirection of farming is needed for the country to respond to new realities. Polarisation of the debate does not help.

The shaming of farmers for climate change should stop and “farmers need to be seen as part of the solution rather than the problem”, Taoiseach Leo Varadkar said at the weekend. They can lead the necessary move to sustainable food production; bioenergy replacing importation of oil and gas, and carbon capture through land use change, he suggested, flagging the Government’s backing for such efforts.

Mr Varadkar said an argument was to be made internationally that food production should be viewed differently to other sectors such as transport, construction, and oil and gas extraction. The problem is up to now Ireland’s overall climate performance is so poor, its credibility is tarnished, making such a big concession hard to get across the line.

What big decisions are being considered?

Signing off on the Paris rulebook is the big one. It would level the playing pitch and ensure water-tight monitoring of emissions including how “carbon credits” are measured and applied, notably in relation to forestry.

What is the likely outcome?

A deal of sorts will be forged; the question is how significant. It is essential to secure more ambitious national commitments – particularly from the main emitters – to immediately start reducing emissions at a pace consistent to reaching carbon neutrality by 2050.

Regardless, many countries will join the higher ambition club. EU member states will back efforts to make Europe the first carbon-neutral continent. Ireland has yet to fully commit in that regard.