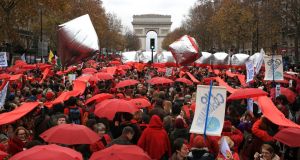 We will never know how many people would have participated in the great march for the climate on November 30th, the day the COP21 conference started, had French authorities not cancelled the demonstration in the wake of jihadi attacks that killed 130 people in Paris.

But the fact that hundreds of thousands of people marched in cities around the world to send a message to the leaders and negotiators in Le Bourget, was cause for optimism.

And despite the ban on public gatherings, thousands of protesters travelled to Paris, without knowing if their journey would serve any purpose.

Many came on their own. Others, like 40 Irish people with the Stop Climate Chaos coalition, travelled in groups. French authorities wavered, initially turning the Irish around at Cherbourg, then sending them on their way. “We won’t have our voices silenced,” said Nicola Winters (32) as she stood in the Avenue de la Grande Armée with a tricolour over her shoulders at the “red line” protest.

There were three street demonstrations in Paris on Saturday, while negotiators put final touches on the agreement. Alternatiba, the group which organised the “state of climate emergency” demonstration at the Eiffel Tower, said police barricades prevented several thousand people reaching the Champ-de-Mars.

Indigenous peoples – Amazonian Indians, Eskimos from Greenland, tribal chiefs from Papua New Guinea – started the day with drums and song, marching from Notre Dame to the Pont des Arts. The preamble of the agreement mentions the impact of global warming on these peoples, but they’re disappointed their rights are not mentioned in the text.

At the “red line” demonstration between the Arc de Triomphe and the Port Maillot, marchers wore red hats and scarves, and held aloft red flowers and umbrellas. “We have the last word, these thousands of us in the streets today,” said Ciara Kirrane (31). “Regardless of what they do in Le Bourget, we’ll continue to fight for climate justice.”

The term “climate justice” has entered the vocabulary of politicians and protesters alike.

“This is the most important movement of our time,” said Laurie King, a 24-year-old master’s student from the University of Edinburgh. “The global environmental movement unites everyone across the globe, because the climate has no borders.”

Beware, oil companies and laggard politicians. Taoiseach Enda Kenny was criticised by demonstrators for giving higher priority to the economy than to climate change, for having “reassured vested interests” and for refusing to reconsider Irish farming policies that release substantial amounts of methane.

NGOs, climate experts and demonstrators stressed the need to convert to vegetarianism, or at least less meat consumption. “We need to move away from the idea that humans have the right to dominate and control,” said Laurie King. “We have no right to farm animals the way we do. It’s a moral issue.”

Gone are the days when ecologist movements were considered quaint and eccentric, when French intelligence agents could sink a Greenpeace ship with near-impunity. As Bob Dylan sang in the 1960s, “The times they are a-changin’.”

The protesters distrust the Paris agreement because past accords, including the 1997 Kyoto Protocol, did not achieve what they promised. The global environmental movement will be there to keep the politicians to their word. As Irishwoman Sydney Weinberg (28) said: “Being here, you can feed off the energy and learn how to bring it back to Ireland.”

COP21 and the demonstrations raised consciousness, at a time when everyone is beginning to feel the effects of climate change. One no longer sees sparrows, robins or ladybirds in Paris. It hasn’t snowed in the French capital for many years. Paris temperatures rose well into the 40s in the summers of 2003 and 2015.

The fight to save the planet may be the only thing we can all agree on. It could give meaning to our time, as anti-Vietnam war protests shaped the 1960s and 1970s, and the anti-apartheid movement swelled until it eventually brought down the apartheid regime in South Africa.

Donna Cooney (40) drew a different historical parallel. “We’re coming into the centenary of the rising,” she said. “I’m the great grand-niece of nurse Elizabeth O’Farrell, who carried the surrender flag out of the GPO. I know she would have been here with me.”

Most of the protesters I spoke to had flown to Paris. A few, like the Bishop sisters, Anne-Mieke and Charlotte, (25 and 29), found carbon-free transport, cycling from Dublin to Paris. Through social media, like-minded French people offered hot showers and sofas. The sharing economy is part of the energy transition.

Habit may be the greatest threat to our newfound determination.

“We have freedom to consume and pollute, and we want to continue,” the Danish sculptor Jens Galschiot (61) said as he stood in his furry white jumpsuit, part of a 10-strong “polar bear army” who staged humorous protests around Paris.