Targets, transparency and ‘ratcheting-up mechanism’ at issue as deadline looms

With three days remaining of COP21, attention is turning to whether an agreement can be reached before its end.`The Climate action network held a colourful demonstration in Paris calling for 1.5c limit in the global temperature. Video: Harry McGee 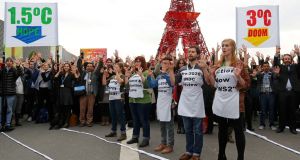 COP21: What are the sticking points?

The text has been reduced to 48 pages, and ministers from almost 200 countries have been working on it for two days now with the hope of reaching agreement by Friday.

There’s a lot of sculpting still to be done - and it’s like working with very hard marble.

The French presidency of COP21 has shown impressive skill in ensuring that the talks remain disciplined and focused and that they stick to the timetable.

The biggest crunch issue is the level at which global temperature rises should be limited. However, like every other issue this cannot be looked at in isolation. Even if a target is agreed, action must take place to ensure it’s delivered.

Environmentalists, as well as poorer and more vulnerable countries, have called for an agreed temperature increase limit of 1.5 degrees Celsius above preindustrial levels.

Should an agreement materialise, it is expected to set a limit of “below 2 degrees”, or “well below 2 degrees”. But there is growing expectation that the final text will make a reference to 1.5 degrees.

This will not be enough to satisfy every party, but it will show a commitment absence at the end of the failed Copenhagen talks six years ago.

How achievable are the targets?

Setting a limit of either 1.5 degrees or 2 degrees is meaningless unless the target can be achieved. For this summit, the French presidency asked all parties to submit pledges on what they would do to reduce emissions, or to decarbonise. Different countries promised different things.

The EU committed to a 40 per cent reduction in emissions by 2030, while China committed to reach peak carbon at 2030 (in other words, a slower process of winding down).

An attempt has been made to compile an overall figure from the more than 160 submissions received. This has produced a 2.7 degrees Celsius rise, which would not avert catastrophic damage due to climate change. Nor does it take into account emissions that were not included.

How much money is being pledged?

Even to achieve a 2-degree reduction will mean sacrifices and painful compromises. There was a commitment agreed in Copenhagen that rich countries would fund climate change adaptation in poorer countries to the tune of $100 billion (€92 billion) each year. There is still ongoing wrangling over that figure.

In terms of adaptation (that is, funds for countries to adapt to climate change impacts that have already happened), the offer from rich countries is paltry: the African countries suggested a compromise figure of €32 billion - but there is a huge shortfall in commitments on that.

What other issues are at stake?

Another two necessary factors are transparency and what’s called the “ratcheting-up mechanism”.

Transparency is a big theme for the EU and ensures the emissions that countries are reporting are accurate, and that they are actually living up to their pledges.

Saudi Arabia, for example, has said it will reduce its carbon output by 130 million tonnes of CO2 equivalent per annum from its current levels.

The problem is that nobody knows what its current levels are, and Saudi Arabia has yet to volunteer that information.

What’s all this about ‘blocking’ states?

A lot of time at the talks has been spent on “blocking” countries.

These wish to achieve a minimal agreement that does not threaten the status quo.

Most of these are oil-producers, the chief of which is Saudi Arabia. It has blocked most meaningful proposals, including a scientific review that indicated 1.5 degrees and not 2 degrees should be the maximum increase in temperatures.

It is essentially getting countries to commit very early to making more ambitious commitments on emissions reduction and decarbonisation. Campaigners say the world cannot wait until after 2020 for this process to start because it will be too late.

The EU and US in particular, as well as poorer countries, have been supportive of an earlier date, but there has been opposition to this, including from the chief “blocker” state, Saudi Arabia.

The other big theme is differentiation. This sets out the different responsibilities of rich developed countries and developing countries.

For the latter, it is important that a climate change agreement does not impede their efforts to improve living standards and eliminate poverty and injustice.

However, the US among others has been advocating a change whereby developing countries making the transition to becoming richer begin to make contributions. The quid pro quo from that might be greater commitments in finance.

Who exactly are the blocking countries?

Mainly oil-producing states, they include Saudi Arabia and Arab countries as well as South American countries.

India has called for a 1.5 degree limit but is very opposed to any constraints that will hamper its own development. It argues that the average US citizen is responsible for 34 times more emissions than his or her Indian counterpart.

China has been dragging its heels on having external monitoring of its emissions, although it has acted robustly on the climate change issue domestically. Russia has kept its cards close to its chest and there is ambivalence about its position.

The G77 group of countries led by South Africa has been very unified on the finance issue. The small island states and the least developed countries have been very strong on the loss and damage issue. They have also strongly argued for a 1.5 degrees target.