COP21: Protecting the Earth’s trees is key to any deal 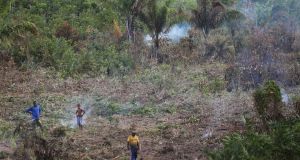 Preserving the Amazon and other tropical rain forests by halting their destruction must be a key element of any agreement at COP21 because of their vital role as “carbon sinks”. Indeed, this could cut global carbon emissions by an estimated five billion tonnes every year, helping to avert dangerous climate change.

According to Richard Houghton, senior researcher at the Woods Hole Research Center in Massachusetts, this finding adds to a growing body of scientific work indicating that a greater focus on tropical forests could be one of the world’s best chances of staying below the threshold of a 2 degrees Celsius global temperature rise.

Lead author of a study published in the latest issue of Nature Climate Change, he said “feasible improvements in tropical forest management could bridge the gulf between today’s rampant fossil fuel emissions and a sustainable future”, noting “indigenous forest peoples have a crucial role to play”.

Tropical forests can absorb and store huge quantities of carbon to offset a large proportion of global greenhouse emissions if they are protected, Houghton said.

“The research also identifies a key way to make it happen – supporting indigenous forest peoples in their guardianship of their ancestral forests.”

“Tropical deforestation releases more greenhouse gases each year than the entire EU and destroys the world’s most efficient system for carbon capture and storage,” according to Nancy Birdsall, president of the Washington-based Center for Global Development and Pedro Pablo Kuczynski, former prime minister of Peru.

“We need to re-imagine tropical forests as a public utility like electricity, producing a service people and governments, including in the rich world, want to buy,” they said in a report called Look to the Forests. “The problem for the world is that forest destruction, often illegal, generates huge profits in the short term.”

But the ambition of halting deforestation is realistic, according to another scientific paper published in this month’s DEC Global Change Biology journal.

It notes that Brazil – the guardian of Amazonia – managed to cut its annual forest emissions by more than one billion tons of carbon between 2004 and 2009.

“Brazil shows it can be done, and done quickly,” said Alessandro Baccini, one of the study’s co-authors. “It requires strong political will, however, and that’s an ingredient that too often is missing, not only in tropical countries but also in developed countries, which need to help finance the effort.”

Norway has contributed $1 billion to Brazil’s Amazon Fund in recognition of its achievement in reducing deforestation in the Amazon region by 70 per cent over the past decade – without sacrificing agricultural output or economic growth – and pledged at COP21 to extend this aid programme until 2020.

But Doug Boucher, of the Washington-based Union of Concerned Scientists, said an 18 per cent decrease in Amazon deforestation in 2014 had been “wiped out” by a 16 per cent increase this year. “We’re almost exactly back to where things were two years ago, with an annual deforestation level of 5,831sq km.”

REDD+ (shorthand for Reducing Emissions from Deforestation and Forest Degradation) got a major boost last week, with an announcement from Norway, Germany and the UK of additional commitments of $5 billion to pay tropical countries for “verified performance” under the programme.

But there is not universal agreement on REDD+ at COP21. On Monday, California governor Jerry Brown was accosted by two women from the Global Alliance Against REDD, which claims that it really stands for “Reaping profits from Evictions, land grabs, Deforestation and Destruction of biodiversity”.

Distributing cards saying “No REDD! No CO2lonisalism! No to the Privatization of Nature!”, one of them shouted at Brown that California was backing a UN programme that was a “political and environmental nightmare”. The governor replied: “If you know of any abuses, we will not tolerate that at all.”

Significantly, 14 tropical countries have signed up for the “Lima Challenge” to cut the rate of loss of natural forests globally by at least half before 2020 and strive to end natural forest loss by 2030.

As deforestation accounts for 10 per cent of global emissions, it’s in all of our interests that they achieve these objectives.