COP21 on: One day to save the planet – using legal action 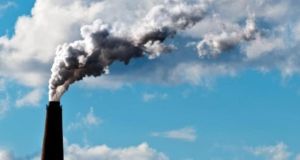 A group of concerned citizens in the Netherlands recently won a similar case against its government.

A Belgian-born mother of two young children living near Newtownmountkennedy, Co Wicklow, has started a “crowd-funding” campaign on Facebook for a legal action against the Government on the basis that not enough is being done in Ireland to tackle climate change.

Mieke Vanfleteren, whose partner is Irish, cited the example of a group of concerned citizens in the Netherlands who recently won a similar case against its government. As a result of this court ruling, she said “a faster transition to a carbon-free economy will now be necessary”.

Last year, some 10,000 people in Belgium became co-plaintiffs in a legal action against its government “because of the lack of sufficient action taken to reduce greenhouse gas emissions”, Ms Vanfleteren told The Irish Times. That case, known as Klimaatzaak, has yet to be determined.

“We need to avoid a 2 degree Celsius temperature rise at all costs if we want to avoid to lose coastal assets and more floods in Ireland,” she said. “There are other advantages to shift to renewables quickly: safeguarding our water, the air and health of our children as well as ending our dependency on oil.

“That’s why we need a [legal] ‘case out of love’, as they call the Belgian climate case,” said Ms Vanfleteren, whose children are aged one and three. “The Irish Government does not have an ambitious programme to make the transition to a fossil-fuel free economy.”

She started a Facebook group called Climate Court Case Ireland that already has more than 400 members. “I set up a crowdfunding website to pay for legal fees necessary to bring this case to court.” See: gofundme/aeaed3ak

“We have the rarest of opportunities to actually change the world, to improve the lives of billions of people.” - US Secretary of State John Kerry

“On these issues I ask you to scale up your consultations to speedily come to compromise solutions.” - Talks chairman French foreign minister Laurent Fabius after releasing the new draft accord yesterday.