Civic spaces to be developed in areas west of Grafton Street

Repaving work to be completed by mid-November 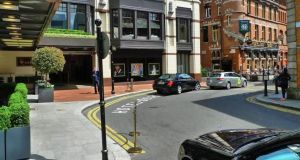 Some of the streets to be revamped include Chatham Street, Chatham Lane, and Balfe Street.

The repaving of Grafton Street, which has seen sections of Dublin’s premiere shopping street cordoned off for months at a time since May 2013, will be completed by mid-November, the council has said.

In addition to removing redbrick and tarmac and laying a new stone surface, the streets will be planted with trees and flowers and will have new seating areas, and there will be no height difference between the road and footpaths to “rebalance” the streets in favour of pedestrians.

Unlike Grafton Street, some of the streets to be revamped, including Chatham Street, Chatham Lane, and Balfe Street, which runs in front of the Westbury hotel, are open to motorists.

“It is a trickier prospect than the Grafton Street works, but we want to upgrade the experience for pedestrians and make it as comfortable for them as possible, while downgrading the importance of cars without banning them.”

The work is part of the Grafton Street Quarter Public Realm Plan published last October, which envisages a €14 million investment over three years in upgrading the largely Victorian area from St Stephen’s Green to College Green and from South Great George’s Street to Kildare Street.

At the other end of the quarter is Johnson Place where South William Street and South King Street meet. The area is currently car dominated. It would be repaved and become a civic space with public seating and tree planting as well as outdoor cafe use. Traffic would not be banned, but the public plaza would force it to travel slowly.

The area where Grafton Street meets St Stephen’s Green is, apart from the new Cross City Luas, to be a traffic-free civic space.