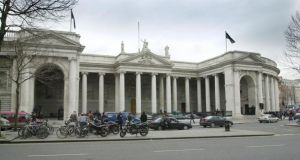 Bank of Ireland on College Green: the rerouting of traffic will be tested on a number of Sundays next year. Photograph: Alan Betson

A proposal to ban traffic from one side of College Green is to be trialled by Dublin City Council next year.

The council wants to restore the area to a “pedestrian friendly civic space” but it says it cannot fully pedestrianise it because of the potential effect on the surrounding road network and the Luas Cross City line due to open in 2017.

Instead, it is proposing to temporarily close down traffic lanes to test the viability of creating an enlarged pedestrian plaza in front of the old Irish Parliament building, now the Bank of Ireland.

The proposal, presented at the Hidden Rooms design conference in City Hall, would see the area in front of the Bank of Ireland blocked off to traffic and a two-way system introduced in front of Trinity College. Northbound traffic travelling down Dame Street towards College Green would be diverted before reaching the bank and would continue to Westmoreland Street on the Trinity College side of the road. There would be no change to southbound traffic flows, but traffic would be reduced to one lane to facilitate the two-way system.

Motorists are already restricted in their use of College Green by the “bus gate”, a ban introduced five years ago on cars travelling north through College Green between 7am and 10am, and 4pm and 7pm, Monday to Friday.

Killian Skay, the council’s senior executive architect, said: “It’s likely that traffic will have to be taken out of College Green at some stage during the construction of the Luas tracks, and what we’re saying is that we should carefully consider what we put back in.”

Dublin Bus and the city engineers agreed with the plan to test the partial pedestrianisation, Mr Skay said. “Anything we do will be reversible and will allow us to figure out the best arrangement for when the Luas is running, because what’s there at the moment doesn’t work for anyone,” he added.

The new layout is likely to be tested on a number of Sundays next year, but dates have yet to be determined.

A car ban has been proposed several times over a number of years. The bus gate was initially proposed as a full private car ban, with only buses and taxis permitted, but was scaled back after lobbying from business and motoring groups.