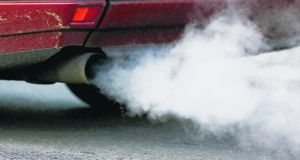 Concentrations of carbon dioxide in the atmosphere are now “higher than any time in the history of our species”, a science event in UCD has been told. Photograph: Andreas Rentz/Getty Images.

Concentrations of carbon dioxide in the atmosphere are now “higher than any time in the history of our species”, a science event in UCD has been told.

Professor Jennifer McElwain told scientists in the university’s Earth Institute that September 2013 had seen concentrations of carbon dioxide rise to 400 parts per million, and while this seemed small at just 0.4 per cent of the atmosphere, it was higher than anything witnessed by humans in the past.

She said 200 million years ago there had been massive biological impact because of high carbon dioxide concentrations, with plant species “migrating” northwards, from the equator.

Prof McElwain said the last 50 years had also shown the beginnings of a similar process, with plants seeding themselves further north of their previous habitats.

She was speaking after European environment commissioner Janez Potocnik warned delegates society needs to “rethink the way we live”.

In a video welcome to scientists attending the event, held as part of ‘The Gathering’, Mr Potocnik said climate change events were showing that adapting to a “Green” economy was not an option, but was “unavoidable”.

He said sustainable economic models and resource efficiency could not “remain a niche concept” but one which must become “the norm rather than the exception”.

Minister for Environment Phil Hogan also stressed the need for resource efficiency and said he would be announcing “future plans for Ireland’s waste enforcement systems in the coming months”.

Mr Hogan’s contribution was delivered on his behalf, as an official explained he was called away to an unscheduled Cabinet meeting on Ireland’s bailout exit.

The two-day gathering in UCD’s Earth Institute features a range of speakers including the Dr Kerri-Ann Jones, US assistant secretary of state at the bvureau of international environmental and scientific affairs.

Dr Jones said the International Panel on Climate Change had recently produced a working paper on the physical signs of climate change, and was working on a reports on how vulnerable the planet was to damage from climate change. She said: “it is about the car you drive, it is about how your heat your home”.

She warned water shortages would begin to be a major problem for significant proportions of the world’s population by 2030.