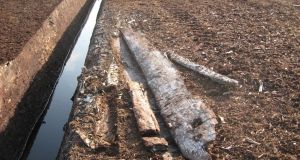 Bronze Age track at Mayne Bog: when Westland Horticulture uncovered it in 2005 the National Monuments Service did not issue a preservation order or record it in the Register of Historic Monuments

The Midland bogs have always been places of mystery – vistas of burnt umber that every so often unearth prehistoric time capsules: vats of bog butter, golden hoards, the mummified remains of sacrificial corpses.

In Longford, the Iron Age road unearthed at Corlea Bog has become the county’s prime tourism attraction, with massive oak planks wide enough for two chariots to pass side by side. In 2005, the discovery of a grander and far longer oak road at Mayne Bog in Coole, Co Westmeath, was a cause of great excitement. The National Monuments Service established that it was no mere trackway, measuring up to 6m in width, and dating to 1200-820 BC – a 1,000 years older than Corlea.

Westland Horticulture, extracting peat from the site at the time, were expected to cease work immediately but the National Monuments Service did not issue a preservation order, nor record it in the Register of Historic Monuments.

And so, every summer, this Bronze Age road continues to be mulched into compost for use in flower baskets and window boxes. At least 75 per cent of the ancient road is now gone.

“It is quite extraordinary that this discovery has not been the subject of comprehensive survey and more extensive excavation,” says Prof John Waddell, expert on the Bronze Age.

“It is a scandal that its destruction through industrial peat cutting continues unchecked . . . Given the European significance of discoveries like this, the inaction of the Department of Arts, Heritage and An Gaeltacht is as depressing as it is inexplicable.”

A spokesperson for Minister Heather Humphries wrote to An Taisce saying: “Given the co-operation so far secured from the landowner, it is not considered that further steps under the National Monuments Acts . . . would be useful or warranted at this stage.”

For their part, Westland Horticulture said it was, “first made aware of the potential presence of an archaeological site at Mayne in 2005 and fully cooperated with archaeologists from Dúchas [now National Monuments Service] who carried out a preliminary site inspection”.

The company later allowed an archaeological consultancy to do an investigatory excavation and worked with it “to apply for licences to complete additional excavation works to the trackways. The work was carried out according to the methodology stipulated.”

The issue appears to be that the licenses only required a tiny fraction of the site be excavated. An Taisce hopes the European Commission will intervene. “The track is undoubtedly of European significance and far older than the Roman roads,” says Ian Lumley of An Taisce.

Prof Waddell says that while “many wooden track-ways are of simple construction, made of brush-wood or round-wood, and served as pathways across short stretches of bog or wet ground, [only] a small number of larger plank-built constructions are known”.

Dr Patrick Wallace, former director of the National Museum of Ireland, said it was an “international calamity”.

Coronavirus: One case confirmed in Northern Ireland 20:03
What should you do if you think you might have coronavirus? 19:58
Predictions of ‘skin and hair flying’ as FG selects 13 of up to 60 Seanad hopefuls 19:14
Legal challenge to Shannon LNG project has EU implications 19:04
German human rights lawyer brings case against Google Ireland 18:56