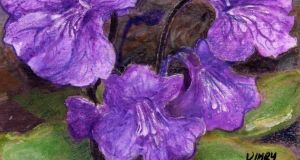 Iberian mystery: how did the large-flowered butterwort of Kerry get here? Photograph: Michael Viney

Just behind the telly is the strongest shelf in the house, supporting the heaviest books in my natural-history library. Weightiest of all is one my doctor might prefer I didn’t hoist out too often: The Flora of County Fermanagh , published last year and flattening the kitchen scales at more than four kilos. (It’s still a good, glossy-leaved read.)

Scattered through other shelves are more portable county floras – Tyrone, Limerick, Offaly, Waterford, Dublin, Cork – not to mention the fine fistful of the recently updated Webb’s An Irish Flora and the New Atlas of the British & Irish Flora , a massive volume with a saving CD stuck thoughtfully inside the cover. All of these have thumped on to my desk within the past decade, but none, I have to confess, has made me much of a botanist.

My love of wild flowers – and ferns, mosses and lichens – is, like most people’s, a simple response to beauty. Yes, I do like to have the name of a plant, but while I think I know a stamen from a pistil, a petiole from a corolla, it doesn’t go much further. A botanist already has the name, even when there’s no flower to be seen or just a scant rosette of leaves – inspected, perhaps, through the standard 10x pocket magnifying glass. He or she likes to know why it grows where it does, its affinities with other plants, its changing fortunes in the landscape.

Irish botanists, professional and keen amateur, have gathered this weekend for a conference among the glorious spring flowers at the National Botanic Gardens, in Dublin. They belong to the Botanical Society of Britain and Ireland and are celebrating not only the 50 years of its Irish activity but also the change in the rendering of the letters BSBI.

Until last year these initials stood for Botanical Society of the British Isles, grown from the Botanical Society of London founded in 1836. After exemplary fieldwork by the Ireland branch for the mammoth New Atlas (Oxford, 2002) and the flourishing of new Irish county floras, such parity seemed a long overdue reform.

Native plants
What botanists do may be judged from members’ activity last year in Co Wexford. They were out every month and gathered more than 20,000 records (4,004 in September alone). Some charted a particular fern’s subspecies; others searched out dandelion microspecies – seven of them – new to the county. Along with new sites for native plants came those of more garden escapes and naturalised introductions – fennel on sea cliffs, daffodils in churchyards, salad burnet on a forest road, a grape vine and a Chinese bramble growing on a ditch.

The Glasnevin gathering is launching a project designed specifically for Ireland, mapping records of eight plants native to the island that may be in decline. A few will suit the volunteer amateur well enough (cowslip, cranberry, grass of Parnassus, autumn gentian), but others (a hairy sedge of fens, a mini-fern, a rare and orchid-pretty parasite of trees, a lesser woodland wintergreen) may need a Webb’s flora even to find the Latin name.

The new Webb’s, so basic to Irish botany, is one for the bookshelf or glove compartment, and doesn’t have photographs. Well tailored to the amateur anorak pocket, however, and splendidly visual, is a new field guide, The Wildflowers of Ireland (Collins Press, €15). This is by Zoe Devlin, whose website (wildflowersofireland.net) has already shown her skill and commitment as flower hunter and photographer.

She has bagged more than 530 of them and groups them helpfully by colour range and shape of flower or cluster. The first Irish pocket guide of its kind, the book is by no means exhaustive, but four kinds of forget-me-not and another four of St John’s wort are as many as most of us are likely to want to tell apart.

Hills and bogs
Another book from the Collins Press coincides well with the conference: a handsome new edition of The Way That I Went , the classic exploration of Ireland by the great Robert Lloyd Praeger. Originally published in 1937, it has been deservedly kept in print, and the new paperback, at €15, reproduces the original text and plates.

Praeger spent five years of weekends walking some 8,000km of fields, hills and bogs through a bungalow-free countryside and across virgin bogs to document the island’s native flora. In the new edition’s introduction I trace his impact on modern Irish natural history, from the age of plant discovery to one deeply concerned with conservation. A central mystery for Praeger was how our “Lusitanian” or Iberian flowers, such as the gorgeous large-flowered butterwort of Kerry, in my drawing, had reached the island.

Many such questions still remain, but last year’s RTÉ series Secrets of the Irish Landscape showed how today’s DNA technology is working to resolve them.