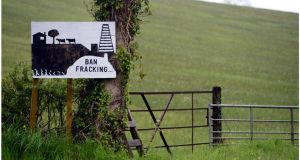 Anti-fracking sign on the side of the road near Belcoo, Co Fermanagh, and Blacklion, Co Cavan. Photograph: Bryan O’Brien

Ireland’s €24 billion food and drink industry could be put at risk if fracking gets the go-ahead, a farm leader warned yesterday as hundreds of farm families gathered close to the Border to highlight concerns about the controversial method of shale gas extraction.

As the G8 delegations started to gather in Enniskillen yesterday, close to 60 tractors were involved in a “slow drive” to the renowned Ballroom of Romance in the Border village of Glenfarne, 25km away.

John Sheridan of the Ulster Farmers’ Union said the industry had spent a long time recovering from BSE, foot-and-mouth disease and a dioxin scare, and could not afford another crisis.

“Three of the five biggest infant milk producers in the world are based on the island of Ireland,” he said. “The food and drink industry is worth €24 billion in the South and probably close to €30 billion North and South – and fracking could ruin that industry.”

Key election issue
Pat Gilhooley, chairman of the Leitrim branch of the Irish Farmers’ Association (IFA) predicted that this would be a key issue in next year’s local elections. “We have to turn up the heat,” he said. “The IFA is a lobby group which represents 90,000 people and I can assure you of our full support.”

Michael Gallagher, a farmer and member of the Love Leitrim group which campaigns against fracking, said farmers were worried about the risk to water and to their livestock from chemicals .

His farm is in Kiltyclogher, close to the family home of the 1916 leader Seán MacDiarmada, a distant relative.

“I often wonder what he [MacDiarmada] would think if he knew they wanted to frack under his home,” he said.

Eddie Mitchell, an organiser of yesterday’s rally, said it was crucial to show solidarity with people in Fermanagh who were further along the road in the licensing process.

“I think people wrongly believe that this is an issue which is confined to Leitrim and Fermanagh, but it will have an impact throughout the country ,” said Mr Mitchell .

Festive atmosphere
There was a festive atmosphere at the Ballroom of Romance, the inspiration for the William Trevor short story of the same name, as families gathered with a selection of “Not for Shale” and “Farming Not Fracking” placards .

“A lot of people thought it was a good way to spend Father’s Day, as after all what could be more important for families,” said Dervilla Keegan of the Love Leitrim group.

“The G8 people may not know we are here but it is important to make a statement,” said Mr Gallagher.