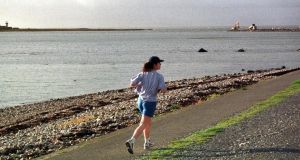 Galway city’s population is expected to double by 2040. Resource efficiency will become “accepted wisdom”, there will be a shift in the concept of “waste” with 100 per cent re-use of materials also becoming a norm.

In 2040 a flood-prone Atlantic seaboard will be contributing “blue energy” – created by harnessing the waves and the wind – to the east coast, with wave-height sensors telling consumers the cheapest times to use electricity.

Loss of biodiversity will be costing the EU €450 billion annually, and the food industry will be forced to place “sustainability” at the heart of business as resources will be scarce and expensive.

Such is the scenario for a warmer, wetter and much larger Galway within three decades, as outlined by Prof Colin Brown, the director of NUI Galway’s Ryan Institute for Environmental, Marine and Energy Research.

Prof Brown says the process involved in compiling yesterday’s UN Intergovernmental Panel Climate Change report means that “99.9 per cent of the researchers who published in peer-reviewed science journals agree in general with the conclusions”.

His forecast for Galway 2040 is based on a two- to three-degree average temperature increase by 2050, and up to six degrees by the end of the century.

Intense weather
“The additional solar energy trapped in the atmosphere will give rise to increased frequency of more intense weather events, leading, for example, to flooding or periods of droughts,” Prof Brown says.

“Traditional species of crops will not flourish in a warmer wetter environment particularly if no remedial action is taken to prevent temperature rises.”

Galway city’s population is expected to almost double by 2040 from 75,000 to 125,000 or more. Resource efficiency will become “accepted wisdom”, there will be a shift in the concept of “waste” with 100 per cent re-use of materials also becoming a norm.

Sustainable aquaculture will also be regarded by the EU as vital for food security, with “green” shipping for transport of goods on short hops around the coastline and marine tourism, he says.

Covid and Brexit could pose risk to medicines supply, says pharma sector 01:00
Teenage boy dies at Powerscourt Waterfall in Co Wicklow 23:15
Theft and drugs top list of offences dealt with by Probation Service 22:01
‘John Hume came out for us that often, Derry needed to come out for him’ 21:09
Dignitaries send tributes to Hume funeral from around the world 20:41