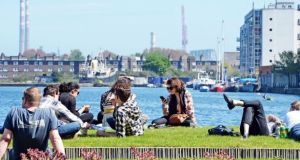 April 2016 was the hottest April on record globally and the seventh month in a row to have broken global temperature records.

The latest figures smashed the previous record for April by the largest margin ever recorded.

It makes three months in a row that the monthly record has been broken by the largest margin ever, and seven months in a row that are at least 1 degree above the 1951-80 mean for that month. When the string of record-smashing months started in February, scientists began talking about a “climate emergency”.

Figures released by Nasa over the weekend show the global temperature of land and sea was 1.11 degrees warmer in April than the average temperature for April during the period 1951-1980.

It all but assures that 2016 will be the hottest year on record, and probably by the largest margin ever.

The current blast of hot air around the globe is being spurred by a massive El Niño, which is a release of warm water across the Pacific Ocean.

But it is not the biggest El Niño on record and that spike in temperatures is occurring over a background of rapid global warming, pushing temperatures to all-time highs.

“The interesting thing is the scale at which we’re breaking records,” said Andy Pitman, director of the ARC Centre of Excellence for Climate System Science at the University of New South Wales in Australia. “It’s clearly all heading in the wrong direction.”

He said: “Climate scientists have been warning about this since at least the 1980s. And it’s been bloody obvious since the 2000s. So where’s the surprise?”

“The 1.5 (degrees) target, it’s wishful thinking. I don’t know if you’d get 1.5 (degrees) if you stopped emissions today. There’s inertia in the system. It’s putting intense pressure on 2 (degrees),” he said.

The record temperatures are wreaking havoc with ecosystems around the world. They have triggered the third recorded global coral bleaching, and in Australia 93 per cent of the reefs have been affected by bleaching along the 2,300km Great Barrier Reef.

In the northern parts of the reef, it is expected the majority of coral is dead, and on some reefs over 90 per cent of the coral is dying.

A recent analysis showed the bleaching on the Great Barrier Reef was made 175 times more likely because of climate change, and the conditions that caused it would be average in fewer than 20 years.

The April figures come as the symbolic milestone of CO2 concentrations of 400 parts per million (ppm) have been broken at the important Cape Grim measuring station in Tasmania, Australia.

Reflecting on the CO2 concentrations, Mr Pitman said: “The thing that’s causing that warming, is going up and up and up. So the cool ocean temperatures we will get with a La Niña are warmer than we’d ever seen more than a few decades ago. . . This is a full-scale punching of the reef system on an ongoing basis with some occasionally really nasty kicks and it isn’t going to recover.”