Hopes fade for entire pod of whales beached in Falcarragh

Hopes have faded for the survival of any members of a pod of 13 pilot whales which beached in Co Donegal yesterday. Video: Stephen Maguire/DonegalDailyTV 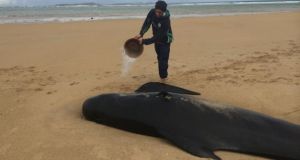 A man pours water over one of the beached whales on Ballyness Beach today. 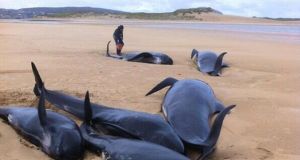 Screengrab image taken from the Twitter feed of @BarryWhyte85 of six of the 13 whales that were stranded on a beach off Donegal. PA 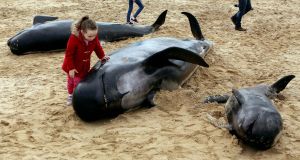 Hopes are fading for the survival of any members of a pod of 13 pilot whales which beached in Co Donegal yesterday.

Locals mounted two rescue missions in a bid to save the whales after they were spotted by a jogger on the strand at Ballyness Bay, Falcarragh, Co Donegal yesterday morning.

Five of the whales died on the beach but the remainder were dragged back out to sea using a JCB and plastic sheeting. Three made it out to open water but the remainder became stranded again when they swam towards an inlet.

The whales then appeared back in shallow waters several hours later and beached again.

Gardaí and the Irish Coast Guard were on the scene as thousands of people arrived at the beach throughout the day to witness the rescue efforts.

Manager of the National Parks and Wildlife Service, Dave Duggan, appealed to people to allow the animals to die in peace. “I know people have good intentions but this is nature and this is what these animals do. It happens all the time,” he said. “I would appeal to people to stay away from this area and allow nature to take its course. I would also ask people not to touch the whales. They are on the beach for a reason – because some of them are sick.”

Donegal County Council officials are expected to visit the scene today to make a decision on the disposal of the whales’ bodies, which may be buried on the beach.

The Irish Whale and Dolphin Group said the incident is the 13th stranding reported on Donegal shores this year.