A group of residents and anti-water service charge protesters in Dublin are preventing Irish Water contractors from installing water meters in a Raheny estate today. 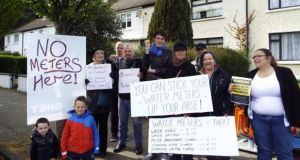 A small group of residents and anti-water service charge protesters stopped Irish Water contractors installing water meters in a housing estate on Dublin’s northside today with the woman behind the campaign saying she was prepared to go to jail before allowing installations take place.

It is the second day of protest involving around a dozen people at Waterwell Drive in Raheny.

Yesterday’s demonstration which was led by local residents Donna Ryder did not disrupt the installation process.

“I am making a stand against what they are doing,” she said. “I want to know why we are being made to pay the water charges when they brought it in as a tax to bail out the banks”.

The turnout out was small with Ms Ryder said she would have liked more local residents to join her in making a stand. Despite the apparent absence of support in the community, she said she was committed to continuing her protest. “If they feel the need to arrest me than so be it.”

Meanwhile anti-water service charge protesters have vowed to continue their support for residents of a Cork housing estate as they began a second day preventing Irish Water contractors from installing water meters in the estate yesterday.

About six members of the Ballyhphehane and South Parish Anti-Water and Property Tax group continued with their blockade of the Ashbrook Heights estate in Lehanahgmore in, Togher on Cork’s southside yesterday morning.

The group, who on Tuesday prevented contractors from Irish Water installing meters at the 65 houses in the estate, were warned by gardaí yesterday that they could face arrest if they continued with their blockade of the estate.