Anti-water charge protests to be held across the country

Protest group expects about 100 demonstrations to be held on Saturday 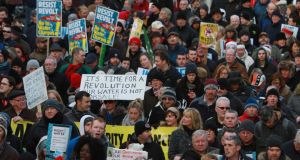 File photograph of the protest against wager charges in Dublin on December 10th, 2013. Photogrpah: Nick Bradshaw

People are set to take to the streets and march in protest against water charges across the country on Saturday.

The largest protest is expected to be in Dublin as demonstrators plan to gather at Heuston and Connolly train stations at 2pm and march along either sides of the quays. Groups in suburban areas are expected to march to meet the larger groups in the city centre.

Bernie Hughes, from the Finglas Says No group, said there should also be about 100 protests around the country on Saturday.

“It’s hard to know how many people will take part but there will be a huge amount of people out in Dublin city,” she said.

Ms Hughes said the demonstration was about “ordinary people” coming together.

The protest was about abolishing Irish Water “but it’s not only about that,” she said.

Ms Hughes said protesters were travelling on buses from a number of counties to join the protest. “Our protest will be a peaceful protest like every other protest we have done.”

Gardaí have urged all involved in the protest to “do so peacefully”. “The safety of everyone involved is a priority and we acknowledge the co-operation and assistance of the organisers,” a spokesman said.

Gardaí said a policing plan is in place for the events in Dublin and warned traffic disruptions should be expected. Ahead of the protests, an Irish Water spokeswoman told The Irish Times the company was “not in the decision making seat”.

“We respect people’s right to protest and demonstrate and make known their concerns and issues,” she said. “But the legislation had been passed in the Oireachtas. We’re implementing Government policy.”

The Right2Water campaign, who are not organising Saturday’s protests, have urged the public to take part. It said people were marching “for abolition, not concessions”.