Another Life: The lost treasures of the dead zoo

Stephen Jay Gould loved the natural history museum in Dublin, with its gleaming glass cabinets. But a financial crisis has forced it to close two floors. How marvellous it would be to see its full trove again 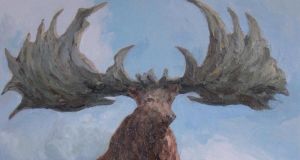 Giant deer: as they grew, their antlers grew too. Illustration: Michael Viney

I suppose I shall get better at navigating the virtual tour that the natural history museum in Dublin now offers at its website, although I can still lurch into an empty corner or get stuck behind a pillar – a third dimension of elderly confusion. I have noticed, however, how beautifully clean the glass cabinets of stuffed or mounted creatures are, even on top, of which Stephen Jay Gould, the late and great Harvard evolutionary biologist, would certainly have approved.

Back in 1971 he was climbing around the cabinets to measure the width of giant-deer antlers mounted on the wall above and found himself kneeling on glass an inch deep in dust. “My, oh my,” he wrote later, in one of his popular essays, “the museum was a dingy place back then.”

His concern with the extinct “Irish elk”, as it was known in the US, was to refute the creationist claim that its antlers, seeming so impossibly huge, could not have served the deer’s fitness or survival but would have tangled it in trees or dragged it down into bogs. Armed with the first proper measurements, Gould was able to fit the deer into the evolutionary process called allometry, in which, as deer get bigger, their antlers increase to a proportionately greater size.

About three million physical specimens of countless species, from beetles to sharks, accumulated in the 157 years of the museum’s existence, are what make it so valuable to science; biology university students are among its most constant visitors. But Gould became its special and enthusiastic champion when he found it “uplifted from squalor to glory” by its meticulous interior restoration in the 1990s.

In his widely quoted essay Cabinet Museums: Alive, Alive O! (collected in Dinosaur in a Haystack, 1995) he compared the Victorian approach to displaying nature with that of today’s museums.

“You can put one beetle in a cabinet (usually an enlarged model and not a real specimen), surround it with fancy computer graphics and push-button whatzits and then state no other group maintains such diversity. Or you can fill the same cabinet with real beetles from each of a thousand different species – all of differing colours, shapes and sizes . . . show everything and incite wonder by sheer variety. But I had never realised how powerfully the decor of the cabinet museum can promote this goal until I saw the Dublin fixtures redone right . . . The exuberance is all of one piece – organic and architectural . . . ”

That exuberance, however, has been having a hard time. After the museum’s closure in 2007, when a staircase collapsed behind the scenes, the current public enjoyment of it still has not included, for “safety reasons” (and no wheelchair access), public access to the higher galleries.

In the heady boom years of the National Development Plan, a grant of €15 million was scheduled to pay for a new extension, elevators, a shop and cafe. Last October the board of the National Museum of Ireland (which includes the natural history building) mourned the subsequent reality of severe cuts in funding and staff. It needed another €600,000 to keep “minimal services” for this year but didn’t get it.

Sealing off the two upper balconies, even from the virtual tour by the 3D cameras (go to museum.ie/nh3d), closes public access to one of the natural history museum’s most prized and astonishing treasures: its collection of glass models made by Leopold and Rudolf Blaschka, a father and son in 19th-century Dresden.

These remarkable craftsmen began by making botanically accurate glass models of flowers, then moved on to commissions from museums to do perfect models (from scientific illustrations) of soft-bodied animals, especially of the sea, that don’t keep well pickled in jars.

In the late 1800s the Dublin museum commissioned 530 for display: tentacled marine worms and anemones, sponges, squid, a fabulous octopus; some even enlarged microscopic creatures to display their beauty and complexity.

Their delicacy means that many Blaschka pieces have been broken or lost across the world. The Dublin museum has had a skilled glass conservator, Lorna Barnes, working to extend the lives of the 300 or so that were once on display.

The “Crystal Jellies” page of its website gives a tantalisingly partial glimpse of the fabulous radiolarian, a masterpiece of magnifying and modelling of a microscopic sea creature.

For that whole animal, and many more, seek out the beautiful Blaschka video at the website of the Natural History Museum (nhm.ac.uk) in London. Some of the Dublin models were given a brief and precarious outing to the temporary Dead Zoo at Large exhibition, in Collins Barracks, in 2009. (“Very scary stuff,” said Nigel Monaghan, the museum’s enterprising keeper, of the slow drive to take them there.) But I long to see, even virtually, a properly mounted display of them all, complete with jewellery-shop spotlights.