Another Life: The Arctic’s icy foundations begin to shift

Meltwater lakes are forming beneath ice as global warming accelerates 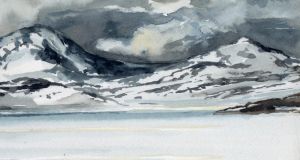 Towards the end of February the light is creeping back across the Arctic, and that, at least, won’t have changed. I can also assume, I think, that the fjord at Klaegbugt, in Germania Land, at the northeast corner of Greenland, is still firmly frozen shore to shore, although even the Arctic winter sea ice is beginning to yield to global warming.

On May 29th, 1987, the Twin Otter flying us from Iceland landed on the fjord. On its first attempt the plane’s skis broke alarmingly through the ice, and the engine roared as we lifted off for a second circuit. We came to rest farther out in the solid middle, leaving a long way for us to haul our boxes. But I wonder, now, if the ice would be safe to walk on at all.

Almost 30 years on, the three-month expedition with the ornithologist David Cabot and the botanist Roger Goodwillie remains my most exotic adventure. And the barnacle geese that we went to study are doubtless still arriving from Ireland in June, to nest on the high ochre cliffs. But Greenland has, of course, been changing profoundly, right to its icy foundations. I follow its fortunes attentively, not least through the emails sent daily from the Climate News Network.

This is the voluntary enterprise of four veteran environmental journalists, all formerly with the Guardian or BBC: Paul Brown, Kieran Cooke, Alex Kirby and Tim Radford. They sift the science journals, reporting on relevant findings, setting them in context and interviewing the researchers. They include the cautions and caveats along with often dire implications.

The flow of their – entirely free – bulletins over the past year reflects the increasing concern for the stability of the thick ice cap that covers most of Greenland. Theoretically, if it all melted, global sea levels would rise seven metres or more. This, indeed, “would take considerable time”, but the rate of melting has accelerated enough to make a currently small but measurable difference. The Arctic is warming faster than most of the rest of the world, and in the exceptionally warm summer of 2012 the whole surface of the ice cap was awash.

The meltwater drains through fissures to arrive at muddy bedrock thousands of metres below, thus easing and hastening the flow of the glaciers. At Klaegbugt in July I awoke in my tent to crashing explosions and thunderous roars as meltwater high on the clifftops broke through frozen barriers to plunge down into the fjord. At the high and icy horizons of the ice cap to our west, meltwater was finding hidden ways to the sea.

Two teams of US scientists have now reported, in separate journals, on hidden lakes beneath the ice. One team, working in northeast Greenland, found a collapsed hollow 70m deep. They watched as summer meltwater made its way down its fissures to fill a hidden subglacial lake at the base of the ice cap. When this in turn emptied they calculated the flow at 215 cubic metres per second. Another team, in southwest Greenland, found a slumped crater that suggested some 30 million cubic metres of water had suddenly drained away.

The increased flow of freshwater into the north Atlantic has implications for the ocean conveyor belt that draws the Gulf Stream northwards to warm western Europe in winter. For the Arctic’s marine mammals the steady loss of sea ice spells a catastrophic future, with major changes in population and behaviour already beginning.

Walruses need ice floes on which to haul out between dives for the clams and other shellfish they feed on. Without them they crowd on to beaches. Last September some 35,000 were spotted piled together on a barrier island off Alaska, risking nervous and fatal stampedes from the noise of passing planes and helicopters. The Arctic seals, too, harp, hooded and ringed, need ice on which to rest and nurse their young.

The plight of polar bears is now familiar, but the status of the world’s 19 populations (13 of them in Canada) is still confused and uncertain. In one or two, numbers seem to be increasing; others are stable or in decline. An international study of their genetic structures, published online by the public research network Plos One last month, suggests that the bears are converging on the last fringe of summer ice likely to remain by 2040, around northeast Canada and northern Greenland.

Meanwhile, an email from Climate News Network tells me that the melting of Iceland’s heavy glaciers has caused the island’s ice-capped hills to rise by some 30mm a year (this judged by data from a network of satellite stations). The same sort of “isostatic” rebound in the planet’s springy mantle began in Ireland at the end of the Ice Age, more than 10,000 years ago. It is still tipping the north of this island just slightly higher than the south, but at least we don’t have to worry about volcanoes.