Ireland offered has dramatic examples of rogue waves, including those that swamped the bow of LÉ ‘Róisín’ 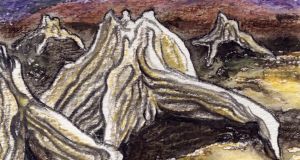 Into the light: uncovered pine stumps on the shore. Illustration: Michael Viney

All summer the quiet tides returned the sand that last winter’s storms had dragged offshore, heaping it even deeper over the old oaken wreck on the strand. My screensaver image shows its bare bow timber leaning above the bright sand like the gnomon on a sundial. Just once, in a storm a few decades ago, its black ribs, too, were laid bare, limestone ballast and shards of earthenware scattered among them.

Perhaps, though I hope not, this winter’s great mill wheels of waves will grind that deeply again. Storms two years ago tore away whole layers of sand and stone west of Spiddal in Galway Bay, uncovering stumps of ancient oak, pine and birch from a 7,000-year-old forest drowned as the sea rose after the end of the Ice Age.

The same exceptional seas, on the north coast of Connemara, exposed remnants of human occupation a metre thick in the sand-cliff shore of Omey Island. There were medieval burials among them, and bog at least 6,000 years old.

Elsewhere along the west coast yet more of the kitchen shell middens of early settlers, back to the late Mesolithic, were stripped away. So the sea reveals the past and then takes it away.

Glimpses of Ireland’s lost shores and drowned forests are not new. Pinewoods submerged off the Bray coast were described by Robert Lloyd Praeger at the end of the 19th century when construction of Bray harbour changed sediment flows and piles of collapsed trees appeared above the sand. Many reappeared again in 2001, when Jason Bolton found sand-polished trunks up to seven metres long and 6,000-year-old pine cones embedded in ancient peat.

Such dark old terraces under the sand scallop some of the strand below me. Farther north, at Carrownisky, pointed pine stumps are stripped back now and then by the surfers’ biggest waves.

These trees, and others in Co Clare, along with those in Galway Bay, were studied by Prof Mike Williams of NUI Galway with his colleague Eamon Doyle. The professor (who sadly died this July) found the Spiddal trees upright and still on their roots, suggesting rapid inundations as sea rose in the wake of the Ice Age.

Now it is certain to seize even more of the coast. This month brought news of yet another massive glacier melting rapidly in northeast Greenland: the 600km Zachariae Isstrom is losing mass into the ocean at five billion tonnes a year.

The global rise in sea level, assessed by satellite measurements, is still about 1mm a year. But such a seemingly minuscule increase is doomed to become a flood as more ice melts and a warmer sea expands.

The rapid disappearance of the world’s glaciers, from Argentina to Alaska, is shown in a recent publication from the climatologist John Sweeney, emeritus professor at Maynooth University. Dramatic pictures in The Global Effects of Climate Change support his prediction that “sea level rise of 400-480mm for 2080 in eastern Ireland should be assumed”.

His maps show the “probability of inundation” for bays and estuaries around the southern half of the island, nowhere more dramatically than at Dublin Bay. The Irish Committee on Climate Change, part of the Royal Irish Academy, adds the vital element of storm surge. Based on the Dublin flooding of February 2002, it suggests planning for four metres above present sea level for the east coast – “a rise in sea level of 0.5m, a storm surge of 2.95m, together with a safety margin”. Such calculations, one presumes, dictate the height of the roadside wall at Clontarf.

Ireland’s storm surges, rogue waves, tsunamis, meteo-tsunamis and even the giants of surfing are assessed in a substantial and fascinating paper by Laura O’Brien of University College Dublin, with her colleagues John Dudley and Frederic Dias. Extreme Wave Events in Ireland 14 ,680 BP– – 2012, published in the journal Natural Hazards and Earth Systems Sciences, is the first catalogue of its kind.

Its most arresting conclusions concern Ireland’s rogue waves of a kind that can wreck ships, smash lighthouse lanterns and snatch people from the shore. Not to be confused with tsunamis and storm surges, they are “large, unpredictable and highly powerful waves that have the potential to cause huge damage . . . They seem to appear from nowhere, with a height 2-3 times that of the surrounding sea state, exist for a short time and then disappear.”

The northwest coast of Ireland has offered dramatic examples, including rogue waves that swamped the bow of the Naval Service ship LÉ Róisín off Donegal in 2004.

But their true frequency has only been hinted at by the network of permanent weather buoys installed offshore since 2000. One of these, the M4, north of Belmullet, rose on December 13th, 2011, in the largest wave ever recorded in Ireland – 20.4m high among waves of generally no more than 13m.

The researchers found it “quite extraordinary” that these should have recorded the distinctive rogue waves at all: there could be many more and even larger ones.

But are “extreme wave events” on the increase? They felt unable to guess.