Another Life: ‘Dolphin initiatives’ can start swimmingly but end badly 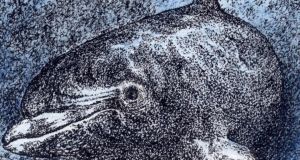 The great gap in the known history of dolphin engagement with human swimmers just adds to the mystery of these extraordinary mammals. The ancient Greeks had many tales of Mediterranean bottlenoses roaming inshore to make “passionate attachments to boys”, as Aristotle wrote, and impressing him with their “gentle and kindly nature”. Boys riding dolphins were embossed on the coinage.

But then not much in the way of solitary wild dolphins making up to people in swimsuits until 1956, at Opononi in New Zealand, when the playful responses of a young female bottlenose to children in the sea made the first fortunes for ice-cream sellers and B&Bs. From there to Dingle’s Fungi, arriving in 1983 and setting a world record for length of stay, stories of “dolphin initiatives”, as they’ve been called, mount in richness and much awe.

The new wave of encounters could, perhaps, be credited to the change in the aquatic garb of so many humans — shiny black neoprene and flippers — and the goggles, masks and breathing aids that take them beneath the waves. There have also been great changes in Western attitudes and expectations, offering species-friendly warmth instead of harpoons.

The first move, however, still belongs to the dolphin: Jacques Cousteau gave up trying to solicit, at random, underwater friends for his camera. But offering the right vibes and gestures to a solitary dolphin’s approach can bring a long-term relationship full of novel emotion, along with its often elaborate games and rituals. Encounters with Whales and Dolphins, a global compilation by Wade Doak of New Zealand in 1988, offers both the joys of swimming with a dolphin and the potentially alarming consequences of an encounter that goes wrong.

Among photographs in Doak’s book is one, perhaps, to balance the uplifting tales of swimming with a dolphin as a loving cure for depression. It shows a male dolphin on his back, penis rosily erect, about to dive between the legs of a rubber-clad female swimmer. Later, she reports, balancing her body across his head, he “began to propel me out to sea”. Though finally and properly alarmed, she confesses “a secret sense of pride in having been chosen by this dolphin for this dramatic ride.”

The extruded penis of dead male cetaceans on the tideline is familiar enough to beachcombers, but the priapic excitement of solitary and randy bottlenoses can be a feature of encounters that go too far in bodily caresses and excitement. Women swimmers have more often been singled out for protracted friendships — sometimes over years — but this may say more about intuitive female gentleness and patience than any delphinoid interpretation of neoprene bulges.

The generally benign nature of dolphins has become proverbial, but as Dr Simon Berrow, co-ordinator of the Irish Whale and Dolphin Group, has needed to stress, the facial “smile” on the dolphin can mislead. A mounting Irish record of interactive dolphins includes a few episodes that ended badly, most recently a rescue of swimmers from the menacing behaviour of a bottlenose in Galway Bay.

This seems to have been Clet — first named in Brittany — a male with an injured dorsal fin and a record of bad temper in encounters from France to Cornwall to west Cork. There, off Sherkin Island, it pushed a swimmer underwater. Moving on to Clare, Clet teamed up briefly with Dusty, already well-known at Doolin and Fanore. This young female has her own record of aggression, snapping her jaws or slapping her tail next to swimmers, ramming them hard enough to crack their ribs and even pinning them to the seabed.

Reporting Irish experience to a Dutch conference, Simon Berrow has urged a campaign “to strongly discourage people from swimming with wild cetaceans”. Meanwhile, he wants some organised treatment of sociable dolphins, perhaps by local wardens enforcing codes of human conduct, and with a clearer meaning to “wilful interference” with the animals.

The unnatural circumstance of solitary dolphins and their “sociable” interaction with people is well discussed on the IWDG website by Paul Kiernan, the group’s welfare officer. He cites a worldwide review (Wilke et al, 2005) of how the dolphin’s behaviour develops, often shaped by the physical and emotional responses of those who swim with it.

From initial and tentative acquaintance with one or two swimmers, perhaps letting them hold its dorsal fin and pulling them along, the interaction can develop and change as more and more people gather in the water to experiment with physical caresses and boisterous manouvres. Reacting, then, as it would with other dolphins, the animal’s play can become too powerful or switch into aggressively hierarchical, combative or sexual drives.

For the IWDG, even sociable wild dolphins are best left to wild lives: too many of them, as the leading attraction of this bay or that, end up injured or dead. As Kiernan asks: “Can we make the dolphin wild again, or have we changed its nature forever?”