Another Life: climate change bound to affect our bats 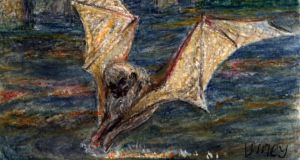 Late on Hallowe’en night a Co Cork reader, Darius Bartlett of Midleton, out walking his dogs on a quiet boreen, was “surprised and delighted” to find bats flickering above his head. So shriven now of spookiness are these little mammals that they prompted mere wonder at being out so late in the year. Back at the car he checked the temperature – about 12 degrees,.

That was before the wind went north. And while the odd warm day in winter will often tempt a few pipistrelles out of the attic, climate change seems bound to affect our bats, if not in their hibernation habits, so important to sustaining their energy, then perhaps in shifting further north or higher up in the landscape. Changes could come to their insect food supply and the impact of storms and floods.

Mediterranean pipistrelles are already moving north, and there are signs of change to the number of species in Ireland.

The supersonic call of Nathusius’s pipistrelle, first heard in Northern Ireland a few years ago (and described as a double “chonk”, loudest at 20kHz on the bat-detector dial), has helped to bring Ireland’s species to 10.

A lone greater horseshoe found roosting underground in Co Wexford in the winter of 2012, and staying on into summer, may or may not have been just a lone voyager from the southern UK. Numbers of our own Leisler’s bats, biggest of the 10 and a heavy consumer of dung flies, are increasing with extra warmth.

Climate change, therefore, is well considered in a new publication from Bat Conservation Ireland. Irish Bats in the 21st Century (€30 from the BCI online) is an elegant, well illustrated and most accessible scientific review and species gallery by Niamh Roche, Tina Aughney, Ferdia Marnell and Matthew Lundy. It mirrors the great change in Irish popular attitudes to bats and a recent explosion in their study, supported by a growing number of “citizen scientists” with bat detectors at the ready.

The report’s findings are generally encouraging. The runaway boom in building did not, after all, cover too many fields in concrete. Agri-environment schemes have protected many hedgerows and saved old buildings from demolition.

And while conifer plantations have no appeal for bats, the slow but steady increase in broadleaves will increase bat shelter and food supply. We are reminded how miserable a terrain for bats was offered by Ireland’s 19th century peasant landscapes, shorn of burnable bushes and trees beyond the walls of the Big House demesnes.

Motorways, street lamps, wind turbines and fields without flowers and insects have to be reckoned with now. But street lamps attract moths, midges and craneflies – don’t they offer handy bat takeaways?

In some parts of Ireland the “tiger” years saw a five-fold increase in suburban and motorway lighting. Most of it was the white or yellow/pale orange light that includes the ultraviolet component attracting swarms of insects (the orange of low-pressure sodium lamps does not).

How this affects bats, however, depends on the species and how vulnerable they are to predators. The fast-flying Leisler’s bat, for example, can look after itself if an owl swoops in, and, emerging around sundown, is more adapted to brighter light than other species.

The Daubenton’s bat of my drawing is a small, slow-flying bat that snatches its insect prey from the smooth skin of rivers. Emerging late from its roosts in crevices under bridges, with eyes that see exceptionally well in the dark, it actually avoids waterways with too much bright light.

Unexpected hazards for Daubenton’s bats have been gleaned from the research of mammalogist Dr Paddy Sleeman of University College, Cork. One is the accidental catch of the bats by fly-fishermen casting for trout by night. Of 100 anglers interviewed in Ireland, 62 had hit or hooked bats with their artificial flies.

Furry pellets regurgitated by Co Cork barn owls and forensically analysed by Dr Sleeman and colleagues have suggested another odd circumstance. Past study in Britain and Ireland had suggested that Daubenton’s bats were very rare prey for the owls. But bat remains in fresh pellets found along the Blackwater river after the big storms and floods last February may hint that the animals had gathered close to hunt on calmer stretches of the upper river and thus made easier targets.

At least, with much ecological urging, county councils have (largely) stopped plastering up the bats’ crevices under old stone bridges.

Daubenton’s also seem the least likely species to be flying near the blades of upland wind turbines, unlike pipistrelles and Leisler’s bats. The vulnerability of high-flying bats is under study by a team at Queen’s University, Belfast, and the hazards at turbines remains “a serious issue” for Bat Conservation Ireland.