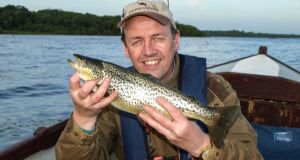 Mark Johnston from Cavan with a superb Sheelin trout caught after the murrough started to hatch.

Inland Fisheries Ireland is seeking the help of anglers and the general public to report any sightings of distressed fish due to high water temperatures or low water levels in Ireland’s waterways.

Anglers are also requested to voluntarily cease using keepnets during this period to avoid unintentional distress to fish kept for long periods in these nets. Reports can be made to local fisheries offices or the 24 hour hotline 1890-347424.

It’s world cup time again. This year the world cup competition celebrates its 60th anniversary of top-class angling on Lough Mask and promises to be bigger and better with an extended invitation to overseas anglers to participate as part of the Gathering.

In keeping with its long tradition, an editorial in the Connaught Telegraph in 1953 noted: “A grand representative entry has been attracted for the event including anglers from abroad, and in thus attracting visitors, the Castlebar club has succeeded in fulfilling the object behind An Tóstal far better than any other organisation in Mayo, perhaps in Ireland.”

While the prize fund this year may not equal that of 1954 which included a car (a Ford Popular) as first prize, nevertheless, prizes have been increased to reflect the Gathering theme and to celebrate this historic landmark. Denis Kelleher’s book Another World on Mask tells the full story.

Evidence of modern technology is echoed with the launch last week of a new website,worldcuptroutfly.com, which provides the history, competition information and application form. The five-day event commences on Thursday, August 1st and culminates on finals day, Monday, August 5th.

At the Galway Weir water levels remained perfect with catches reflecting the great run of fish until the warm weather took hold, Kevin Crowley said. The heatwave took its toll on anglers, however, as most wilted in the hot conditions.

In spite of this, 62 salmon were landed, most of those taken on fly. With plenty of salmon still running, and the weather set to cool down, fishing prospects look excellent for the week ahead.

Of the 32 landed just 11 were retained, the rest safely returned and, out of those killed, five were hatchery fish from another system that made the mistake of turning up in the Dawros.

Angling guide Judd Ruane reported good sea trout action on the Moy Estuary of late, as many game anglers seek sport on the estuary as the calm and warm conditions continue.

Success on Sheelin last week was confined to the evening when the murrough started to hatch and some nice trout were landed. There should be at least another two weeks of good murrough fishing before the green peter starts to feature. The peter is best fished just before dark and again at first light in reasonably calm and warm conditions.

Mark Everard’s recently published Britain’s Freshwater Fishes is a beautiful photographic guide with detailed information on 53 species, the places they inhabit, and their roles in the ecosystem. Attractively designed and easy to use it is the latest in the Princeton Field Guides series. More information at iti.ms/15AmdI9.

Ireland took silver position in the recent Home Nations Boat Championships in Lewis, Scotland. The event was hosted by Stornoway SAC with fishing out from Carloway Port.