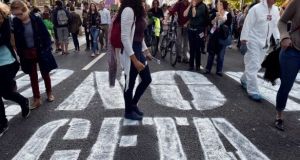 People attend a demonstration against TTIP and Ceta in the centre of Brussels in September. Photograph: Reuters/Eric Vidal

Environmental and heritage organisation An Taisce has expressed concern that a new EU-Canada trade deal may prevent the Government from introducing strong environmental laws.

The landmark Comprehensive Economic and Trade Agreement (Ceta) will be signed on Sunday after a series of key votes in Belgian regional assemblies on Friday ended opposition that had threatened to destroy the entire agreement.

Chris Stanley-Smith of An Taisce said the organisation supported the opportunity for trade between the EU and Canada but there was a need for assurances it would not erode environmental protection.

It called on the Government to give assurances that Ceta would not interfere with its ability to introduce strong environmental laws to protect future generations.

“The lack of transparency in the negotiations of Ceta has been staggering and it is only the recent refusal by Wallonia to sign, that has truly brought Ceta to focus,” Mr Stanley-Smith said.

He noted the agreement had to come back to each member state for ratification.

“There will be huge pressure to advance the deal quickly now, before people take stock and wake up. So, An Taisce is calling for a properly informed debate in both Houses of the Oireachtas before that ratification.”

Mr Stanley-Smith said an area of great concern in the new deal was a new system of arbitration called the ‘investor court system’.

“Under this big business may seek compensation from Government, if they introduce in the future policy and regulations which impact on their profitability or ‘legitimate expectation’ of profits. This may frighten the Government from introducing strong environmental law.

“Tobacco companies have used similar agreements to sue countries for bringing in plain cigarette packaging and companies have sued states for opposing fracking and for reducing their use of nuclear power.”

Ceta, which backers say will boost bilateral trade by 20 per cent, appeared to be in trouble after Belgium’s French-speaking Wallonia region raised a series of late objections.

All 28 EU governments back the trade deal but Belgium’s central government had been prevented from giving consent because it needed approval from sub-federal authorities.

After Belgian politicians agreed to an addendum on Thursday to allay Wallonia’s concerns, the regional parliament voted on Friday to back the deal.

Mr Stanley-Smith said that as a result of their recent refusal to sign, the Wallonians had been assured that Belgium would put the question on the legality of the investor court system to the European Court of Justice.

“The Irish Government seem happy to go into this blindfold, and we are calling on them to await the ECJ’s ruling in this case.”

The EU-Canada summit is due to take place this weekend in Brussels.

1 Children found dead in their Dublin home were murdered
2 Young homeless mother may have been dead in tent for a number of days
3 Aldi, Lidl bow to pressure to ban non-essential ‘middle aisle’ sales
4 Cork shootings: Gardaí believe older son was shot multiple times
5 The real Contagion virus is out there and it’s causing virologists to worry
Real news has value SUBSCRIBE