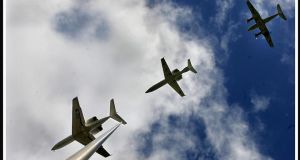 An Air Corps officer has been accused of “abusive behaviour, insubordination and assault on a superior officer”. Photograph: Matt Kavanagh

An Air Corps lieutenant colonel has told a court martial hearing that he was the subject of “an unprovoked and malicious attack” when another officer poked him in the chest.

The court martial sitting in Dublin’s McKee Barracks heard conflicting accounts of an altercation between Comdt Donohoe and Lieut Col John Maloney on August 10th, 2007, during which the latter alleged that Comdt Donohoe called him a “piece of shit”, pursued him into a bathroom and prodded him in the chest, forcing Lieut Col Maloney to seek refuge in a toilet cubicle.

Under cross-examination from Lieut Col Gerry Lane of the director of military prosecutions, Lieut Col Maloney alleged that Comdt Donohoe had exhibited “threatening” and “aggressive” behaviour during the dispute at Baldonnel Aerodrome.

According to Lieut Col Maloney, Comdt Donohoe had been summoned to his office to sign complaint forms which he wanted to lodge with the general officer commanding of the Air Corps.

After he signed the forms, it was alleged that Comdt Donohoe sought to offer Lieut Col Maloney some “off-the-record advice about his [Maloney’s] persistent lying”, at which point he was asked to leave the office.

Lieut Col Maloney told the hearing that having briefly stepped outside, Comdt Donohoe then returned to the office and refused to leave.

The prosecution witness said Comdt Donohoe followed him out of the office, down a corridor, through locker rooms and into the restroom where the assault supposedly occurred.

Solicitor for the defence Matt Shaw said Lieut Col Maloney’s version of events was incorrect as no dispute had occurred after his client left the office.

1 Funeral of John Hume hears peacemaker ‘gave dignity and life to so many people’
2 NPHET calls for ban on non-essential travel from countries with high Covid-19 rates
3 Fresh investigation into the murder of Michaela McAreavey in Mauritius
4 Irish in Canary Islands: Life has changed dramatically
5 Pubs to stay closed until September at least as restrictions tightened significantly
Real news has value SUBSCRIBE