‘We have allowed segregation to happen’

Almost 80% of immigrant-origin children are educated in just a few schools. Is this paving the way to a polarised society?

Students of St John the Evangelist National School come from all over the world, from different backgrounds and religions. We talk to the students and teachers about their school day. Video: Daniel O'Connor 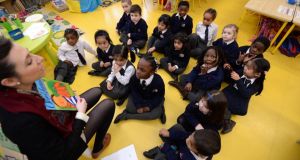 One in nine primary school children comes from a non-Irish background but just a small number of schools cater for most of these children, an analysis of Irish primary school data has found.

Information collected during the Department of Education’s annual census for the school year 2013-2014 shows 23 per cent of Irish schools educated almost 80 per cent of children of immigrant origin.

In 20 schools more than two-thirds of pupils came from a non-Irish background, while in two Dublin schools nine in every 10 pupils came from an immigrant background in 2013-2014. Almost three in 10 schools (29 per cent) had no immigrant-origin children enrolled in the same period, however. The clustering of children from immigrant backgrounds in schools has led principals, academics and the Immigrant Parents and Guardians Support Association to call for more to be done to improve integration in schools.

The analysis must be taken in the context of settlement patterns that mean migrant families are more likely to live in urban areas where more work is available and in places with affordable rental accommodation. Newly arrived immigrants may also choose to live in areas where members of their community have networks.

Those who express concern about integration in primary schools say that, while the State cannot dictate where people live, it can change enrolment policies that discriminate against immigrant families. They point to school waiting lists and to schools that favour pupils of a particular religious ethos as particularly problematic.

The law says it is the responsibility of the management of a school to implement an enrolment policy in accordance with the Education Act 1998, which must be non-discriminatory and applied fairly to all applicants. Parents have the right to choose which school to apply to, and, where the school has places available, the pupil should be admitted.

Colette Kavanagh is principal of Esker Educate Together School in Lucan, one of a number of schools there that have higher-than-average percentages of children of migrant families. She says equality of access to public primary schools is compromised by the implementation of what she sees as these discriminatory, although legal, admission policies.

Although she says public schools of all patronages accept children of all faiths and nationalities when they have space, “when schools become oversubscribed, enrolment policiescome into effect. When a newcomer family [of a different religious ethos to that of the school] attempts to enrol a child in their local school, they may find that there are difficulties in obtaining a place,” she says. Schools being very oversubscribed can result in children being admitted on a first-come, first-served basis, which, she says, affects families that have recently moved to an area.

Concentration of children of non-Irish origin in primary schools

“Newer schools, set up to cater for burgeoning populations . . . generally are the schools that have vacant spaces, creating a situation where new schools have much higher percentages of newcomer children than older schools in the locality.

“This has implications for integration in local communities and in the country in general,” she says, adding that if newcomer families are not getting the opportunity to mix with Irish families through the school, this further limits the development of integrated communities.

Fear of the unknown

However, there are anecdotal examples of the clustering effect. Educate Together principal Tom Moriarty, in a submission to the Committee on Education and Social Protection wrote: “There are schools in Dublin existing side by side where one is almost completely international in nature and the other is exclusively Irish . . . Essentially we are looking at racial segregation.”

In 2013, an Irish-based NGO, the Integration Centre, did a micro-survey of nine schools in three catchment areas in Galway, Cork and Dublin. The now disbanded organisation (it has since consolidated its activities with the Immigrant Council to reduce costs) found that in each of the three areas examined, one of the three schools catered to a higher proportion of immigrant-origin children than the other schools in the area.

Given the small sample, the study is far from comprehensive but the organisation’s former chief executive Killian Forde says it backs up anecdotal evidence that, “where there are two or more schools in a given area, one is predominantly migrant”. He added that, while the State cannot dictate where people choose to live, “it can be more assertive in ensuring that people mix in schools. The problem with clustering . . . is that it takes hold and, once it takes hold, it’s impossible to undo. It’s like trying to unscramble an egg.”

Mary Ryan, one of the founders of the English Language Support Teachers’ Association and the Immigrant Parents and Guardians Support Association, fears the policies in place in the primary system are “paving the way towards a society which is racist and further polarised. We have allowed segregation to happen and the long-term consequences are frightening.”

“Schools should not be part of a social trend towards polarisation on ethnic grounds,” says Paul Rowe, the chief executive of Educate Together.

The Department of Education has long recognised the problems facing immigrant families. A 2008 audit of school enrolment policies was followed by a discussion document in 2011, one of the main objectives of which was to encourage best practice and consistency through regulating admissions policies and processes.

The department is considering a report by the Committee on Education and Social Protection, in parallel with drafting the Admission to Schools Bill. It found “multiple patronage and ethos as a basis for policy can lead to segregation and inequality in the education system” and said the objectives of admission policy should be equality and integration.

It also found the use of waiting lists can lead to discrimination against newcomers to an area, “discrimination [which] should be addressed sooner rather than later”.

In a submission to the Committee on Education and Social Protection the then ombudsman for children, Emily Logan, said denominational schools should not have the right to discriminate on the basis of children’s religion. However, while the committee noted the point made by the ombudsman and others, it also referred to those who claim the Constitution protects the position of denomination-based education and that there is potential tension between Articles 42 (Education) and 44 (Religion) of the Constitution, posing a particular difficulty for legislating this policy area.

A spokeswoman for the Department of Education says its “firm view” is all schools should be inclusive, something she says is reflected in the admissions Bill, the drafting of which is at “an advanced stage”. The Bill, however, still allows schools to protect their ethos and admit pupils on the basis of religion. She says the Bill and its associated regulations “should see improved access to schools for all pupils and ensure there is consistency, fairness and transparency in the admissions policies of schools and in the service they provide to parents”.