Waterford IT appoints new president at ‘important phase’ in its history 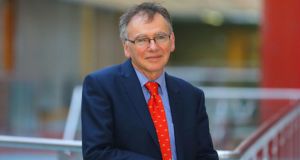 The governing body of Waterford Institute of Technology (WIT) has ratified engineer and researcher Prof Willie Donnelly as its new president.

Prof Donnelly, who became WIT’s first head of research in 2003, replaces Dr Ruaidhrí Neavyn who stepped down amid controversy over the institute’s stalled bid for Technological University status.

WIT chairman Dick Langford said Prof Donnelly had been appointed at an exciting time in the institute’s history.

“ Prof Donnelly has an indisputable track record in his career in the institute to date and his next challenge, and one that he will meet with gusto, is to build on the institute’s strengths, and lead WIT to the next level.”

In a statement on the appointment on Tuesday, WIT did not comment on how it might impact on the stalled bid for university designation following the institute’s decision to pull out of merger talks with IT Carlow.

However, Prof Donnelly remarked “we are now entering an important phase in the evolution of the institute”.

He said: “The pioneering spirit which characterises the institute is reflected in the growth of its internationally accredited research, an innovation culture which is driving the emergence of the knowledge economy within the south east and a research capacity which impacts directly on our students as we redefine the student experience by complimenting traditional learning with an ethos of entrepreneurship and innovation.”

Prof Donnelly was Vice President for Research, Innovation and Graduate Studies at WIT as well as director and founder of the Telecommunications Software and Systems Group (TSSG), which has grown from three to 130 researchers, winning over €80million in competitive funding.

Dr Neavyn, who was last month seconded to an advisory post in the department of education, exited WIT along with chairman Dr Donie Ormonde after the merger talks with IT Carlow collapsed.