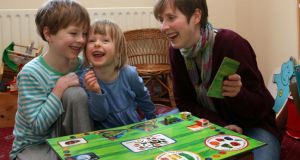 Pauline O’Reilly with her children Finn (6) and Caragh (3) at their home in Galway. Photograph: Joe O’Shaughnessy

‘Mum, I don’t want to go to school!” We’ve all heard it at some stage. However, when Pauline O’Reilly’s young son Finn made the announcement, she decided that she was going to take him seriously and keep him at home. The Galway family is now home educating , using a very specific kind of education called “unschooling”. They don’t follow curricula, they don’t have set periods for learning and O’Reilly’s two children give her the lead when it comes to subjects that interest them.

O’Reilly says she has no particular problem with traditional schooling, but her own experience is that school sets children up to see learning as a series of competitions and tests, rather than something to delight in. “Children have a natural desire to learn,” she says. “If you trust them and work with them it is amazing what they can do. At school, children are conditioned to think that they must learn to please adults, rather than to please themselves.”

O’Reilly’s children, Finn, aged six, and Caragh, three, spend their days at home with their mother playing, reading and taking part in normal household activities such as cooking and shopping. O’Reilly says that they are learning skills as they require them, rather than according to a curriculum. They ask a lot of questions and she is guided by these questions when it comes to their learning. She says her son already has a natural curiosity for maths and follows his interest in the subject.

John Holt, an American teacher and author, first wrote about the concept of unschooling in the 1950s, claiming in his most popular book, How Children Fail, that children naturally want to learn in the same way as they naturally learn to walk and talk. “In many ways it is what comes naturally when you trust your children, in my opinion,” says O’Reilly. “In the US there are ‘radical unschoolers’ who would leave all decisions to their children, from how much TV to watch to what kind of food to eat.

“It is essentially not using a curriculum and not testing or comparing children. I am not sure how I came across it. I suppose my parenting up to that point led me to choose it as a method. I have breastfed my children, co-slept and generally tried to respect their instinct to be human and to learn everything they can about the world, to be cared for by those they trust and to move out towards the world once they feel fully secure and attached. It’s sometimes called attachment parenting. I have also been deeply affected by the work of Alfie Kohn, as have many other parents I know. While he does not speak about home-educating, and indeed most of my friends don’t home educate, most of those who unschool would also follow his approach, called ‘unconditional parenting’.”

While many home schoolers follow a curriculum, O’Reilly claims it is common for parents to move away from formal curricula as they come to trust their children’s instincts and interests.

There is a perception that home schoolers have to meet basic educational requirements; O’Reilly maintains this is not the case and says once you have registered as a home schooler with the National Education Welfare Board (NEWB), you are free to teach as you see fit. The Education (Welfare) Act 2000 specifies that all children receive a “certain minimum education’’ and the NEWB details what that is, including verbal skills development, literacy and numeracy. As part of NEWB registration, there is provision for an assessment of the child’s education.

Article 42 of the Constitution, says O’Reilly, “states that the primary and natural educator of the child is the family. It goes on to say that parents are free to ‘provide this education in their homes or in private schools or in schools recognised or established by the State’ and that the State shall not oblige parents in violation of their conscience and lawful preference to send their children to schools established by the State.”

According to the NEWB there were 699 families registered as home educators in 2011. O’Reilly believes the figure is closer to 1,000, as not all families register, although they are obliged to. According to US Department of Education’s National Center for Education Statistics, there are 1.5 million children being home-educated in the US.

There are no figures for unschoolers in Ireland, but 100 people have registered to take part in a conference on the subject to be held in Galway this weekend. A key speaker will be UK unschooling expert Dr Alan Thomas, who has researched the practice in the US and Australia, and asserts that unschooling is often the trajectory along which home education runs, whether parents originally plan for it or not.

“Unschooling families all have different routines,” says O’Reilly. “We include our children in conversations and in life generally, have lots of books around which they just pick up, let them play when they want, go out and about meeting people.”

O’Reilly’s children are very young. How does she intend to keep up with their learning needs as they get older? “I feel confident that I can teach them anything a primary-school teacher would teach them,” she says. “When they get older, there are plenty of resources out there for them to follow subject interests at a higher level. If they take an interest in a subject that I can’t help them with, then I can find someone with expertise who will. There are routes into university for home-educated children and this is a subject we will be exploring at the conference in Galway.”

So far, O’Reilly’s children have not displayed any signs of the special-learning needs that teachers are trained to cater for. However, O’Reilly is not concerned that she doesn’t have specific training in this area and doesn’t feel other parents should worry either. “Parents don’t have enough confidence in themselves, we’ve come to believe that we have to go to the experts for everything, but no one knows a child like that child’s parents,” she says.

“There are lots of different philosophies around home education generally however and people have different reasons for choosing it,” says O’Reilly, who regularly mixes with other home educators and their children to ensure that her own children have plenty of interaction with people of all ages. “For some it is because their children are bullied at school or not thriving, for others it is for religious reasons and for others it is because the schools they have found don’t match their educational philosophies.

“The key is that diversity is supported so that parents can choose what suits their families. The Minister for Education is very supportive of diversity and giving parents choice. Education is extremely important to us and to all of the families I know and it is for that reason we have chosen this route.”