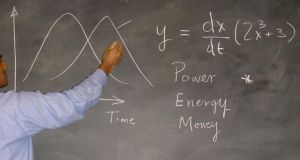 The executive committee of the Irish Federation of University Teachers (Ifut) will meet to decide on a recommendation for members on the proposed new Lansdowne Road pay deal at the end of July. File photograph: Getty Images

The trade union representing university teachers is expected to urge its members to reject the proposed new Lansdowne Road pay agreement in a forthcoming ballot.

The executive committee of the Irish Federation of University Teachers (Ifut) will meet to decide on a recommendation for members on the deal at the end of July.

A ballot of the union’s 2,000 members is expected to take place in the autumn.

However, informed sources said many members in the union were aggrieved at the decision by the Government to drop plans in an original draft of the Lansdowne Road deal to pay for a €1,000 pay hike for higher earners scheduled for 2017.

It is unclear whether Ifut would agree to be bound by the aggregate vote of unions affiliated to the public service committee of the Irish Congress of Trade Unions if its members voted to reject the proposed accord.

However, some sources said there was a recognition that the Lansdowne Road deal was a collective agreement reached with the public service trade union movement.

Under the deal, staff across the public service would receive a boost of about €1,000 in earnings next year brought about by changes to the application of the existing pension levy.

Under 11th-hour revisions to the pay document put in place following talks between Ministers, original proposals to provide a €1,000 boost to those earning more than €65,000 in the public service in 2017 were shelved.

This increase will only now apply to those earning less than €65,000.

A significant cohort of members of Ifut would earn more than €65,000.

The recent decision by members of large unions such as Impact and the Irish National Teachers’ Organisation to back the deal has given a significant boost to the prospects of the proposed agreement being accepted ultimately by the public services committee of the Irish Congress of Trade Unions.

While the Lansdowne Road deal has been supported by primary school teachers, it has faced opposition elsewhere in the education sector.

The central executive of the ASTI will consider the issue at a meeting in late August or early September. A ballot of ASTI members will be held in the autumn.

The executive of the Teachers’ Union of Ireland (TUI) has also urged its members to reject the proposed new pay deal in a forthcoming ballot.

The TUI has said that if its members vote to reject the proposed Lansdowne Road deal, it will not be bound by any aggregate vote of unions affiliated to the public service committee of the Irish Congress of Trade Unions.

The Lansdowne Road deal has been rejected also by members of the Irish Medical Organisation, but the Irish Nurses and Midwives Organisation has urged its members to back the proposed agreement.