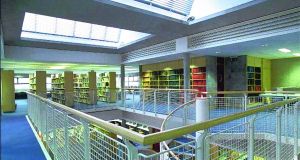 Letterkenny IT: The highest proportion of new entrants in receipt of a grant is at Letterkenny Institute of Technology.

A study by the Higher Education Authority has found that Institutes of Technology have the highest proportion of students receiving grants (56 per cent of all first years) while universities have the lowest level (36 per cent).

The highest proportion of new entrants in receipt of a grant is at Letterkenny Institute of Technology (71 per cent), while the lowest is at Trinity College Dublin (24 per cent).

The figures are based on an analysis of all those who began an undergraduate course in 2013.

The authority said the regional differences between Donegal and Dublin, for example, were explained by higher participation rates in Donegal as well as lower average incomes.

While 67 per cent of new entrants from Donegal are in receipt of a grant compared to just 35 per cent from Dublin.

Overall, the study found 46 per cent of new entrants across all higher education institutions were in receipt of a student grant.

Grants are payable through Student Universal Support Ireland (SUSI) to full time undergraduate higher education students based on an assessment of their income or their parents’ income.

Other factors include the number of dependent children in a family and the numbers at third level. The grants may cover fees and maintenance, just fees or partial fee payments.

This is the first time that a college by college breakdown of the student body by grant-holders has been published.

Tom Boland, chief executive of the Higher Education Authority, said all higher education institutions, in particular Institutes of Technology, have played an important role in broadening access to education.

This was reflected in the high numbers of students from less well-off backgrounds participating in the Institutes with the assistance of a student grant.

He said the new data would provide the basis for the implementation of a new national strategy on access to higher education, which will be published shortly.

“It remains a concern that in some urban areas, particularly in Dublin, levels of participation in education are too low,” he said.

“This is reflected in the take-up of SUSI grants. Disadvantaged rural families and communities seem to place a greater value on higher education and, even though incomes are often lower, there is an emphasis on continued participation in education.”

He said there was a strong co-relation between urban disadvantage and educational underperformance.

“That is a societal issue that should cause alarm. It requires a renewed focus and fresh solutions, including those developed by higher and further education in partnership with local communities,” he said.