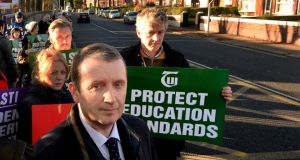 The fact that the last government saw merit in scrapping the Junior Certificate to save €15 million a year is “authoritative evidence” of a cost-saving motive behind current educational reforms, the Teachers’ Union of Ireland has said.

The TUI, which along with the ASTI represents 27,000 secondary school teachers, has announced a second day of strike action over the issue on January 22nd.

Minister for Education Jan O’Sullivan has rejected suggestions that the reform was designed to save money, saying the push towards school-based assessment was guided by best international practice.

She pointed out that the cost of the rolling out the reform programme was €4.8 million in 2014 and €1.5 million in 2013, and there would be further cost implications from teacher training and curriculum changes.

The State Examinations Commission estimates it costs €20.4 million to run the Junior Cert exams each year. This includes paying about 2,300 teachers around €2,000 a year for correcting Junior Cert papers.

Commenting on the Cabinet papers, Mr Quinn said: “Our industrial action on Junior Cycle is not about seeking additional money for teachers.

“However, this authoritative evidence shows that saving money has been a significant consideration for the department in framing its proposals to implement a system of school-based assessment for certification purposes.

“Over the last several years, schools have been hit with a litany of cutbacks by successive governments. Class sizes have increased and the pastoral support framework has been dismantled by the erosion of middle management positions and guidance counselling provision.

“On a daily basis, teachers witness the damage that these cuts have wreaked on the educational experience of students.

“In such a climate, is it any wonder that teachers suspect that the Junior Cycle proposals have a cost-saving aim? In this regard, the content of the declassified papers comes as little surprise. We have always believed that the austerity agenda was a key driver in this move,” said Mr Quinn.

“We fully agree with the minister that project work, portfolio work, practical work and other methods of evaluating student learning are vital elements of a modern, forward-looking system, but we believe that they should be externally assessed. We are also seriously concerned about the greatly diminished capacity of schools to deal with such change.”

The Asti also raised fresh concern about the lack of clarity on resourcing the planned reform. Its general secretary Pat King noted that a survey carried on the union’s behalf by Millward Brown earlier this year showed 89 per cent of teachers said their school had limited, little or no capacity to implement the new framework.

“Any withdrawal of funding from education is extremely short sighted,” said Mr King in response to today’s report.

“The Asti has expressed concern about the lack of detail regarding investment in the minister’s junior cycle reform proposals, particularly in light of years of education cutbacks.”

Under the planned reform, the Junior Cert would be replaced by the Junior Cycle Student Award, 60 per cent of which would be graded through exams and the remaining 40 per cent through school-based assessment.