TUI warns of more lecturer strikes at institutes of technology 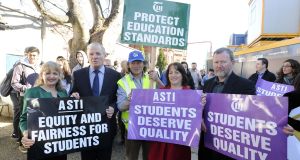 John MacGabhann (right) general secretary of the TUI at a demonstration in Blackrock, Dublin, in 2014. Photograph: Dave Meehan/The Irish Times/Files

The Teachers’ Union of Ireland (TUI) has warned there will be further industrial action in institutes of technology if there is no response by Government to its concerns over funding and staffing levels in the sector.

TUI general secretary John MacGabhann also said if there is to be a strike involving second level schools in a separate dispute over casualisation and income poverty among teachers, it will take place in the week of the general election.

The vast majority of classes in the country’s 14 institutes of technology were cancelled on Wednesday as a result of a one-day strike by some 4,000 lecturers represented by the TUI.

Mr MacGabhann said the institute of technology sector had been engulfed by a crisis. He said since 2008 there had been a 35 per cent reduction in funding and a 10 per cent cut in staffing levels. He said over the same period student numbers had risen by 21,000.

Mr MacGabhann said the union was seeking a process of engagement with Government, starting immediately, to craft a solution.

He said that would involve the provision of additional funding.

He said he knew overnight fixes were not available but the union wanted the Government to start with something that was not just a token.

Mr MacGabhann said no one in Government was disputing the union’s figures as to the scale of the crisis but to date it had only received a series of blandishments.

He said it was absolutely inevitable that there would be further industrial action in the institute of technology sector if there was no response from Government.

He said the union’s executive would consider the issue of a proposed strike in second level schools when it meets on Friday.

He said if this stoppage was to go ahead it would be scheduled for the week of the general election but not on either polling day or the day prior to polling day.

The TUI want a robust engagement with Government, he said . He said since the union had raised the prospect of a dispute in second level schools a number of weeks ago, there had so far been no formal engagement on its concerns.