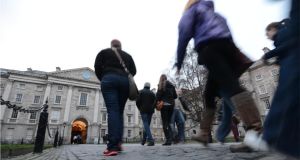 Trinity College Dublin is revising its admissions policy to make it easier for Northern Ireland students to gain entry.

Under the initiative, which seeks to “re-assert its historic mission as a university for the whole island”, Trinity will admit up to 300 students a year from the North with three A-levels rather than the current requirement of four.

This would boost the number of Northern students at TCD three-fold, or to 8 per cent of the student body.

Dr Patrick Geoghegan, outgoing dean of undergraduate studies, said in the 1960s a third of Trinity’s students came from the North but the demand for four A-levels set a major barrier.

Only one in eight students takes four A-levels, he said, adding this was understandable as three A* marks “is enough to get you a scholarship to Cambridge”.

Under the CAO system, three A* grades will earn 450 points. That’s the equivalent of six B3s in the Leaving Cert.

Trinity provost Dr Patrick Prendergast expressed concern at the fall in Ulster students at the inauguration of pro-chancellor Sir Donnell Deeny, founder of the Ireland Chair of Poetry, and judge in the North.

“I am delighted to see Trinity finding innovative ways to attract students from Northern Ireland to study here at third level,” he said.

“I know that the university sector as a whole continues to work collectively towards enhancing opportunities for Northern Irish students to enter Irish university programmes. I very much welcome this collaborative approach.”

Stormont Minister for Education John O’Dowd said the initiative would make studying at Trinity much more accessible to students from the north.

“I am pleased that the necessity for applicants from the north to have four A-levels is being relaxed, as this has been one of the main barriers in the past. I look forward to similar approaches being taken by the other universities in the south.”