Massive Open Online Course in history ‘not a substitute’ for university 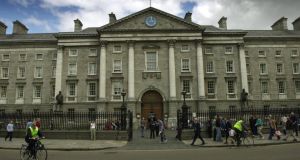 Trinity College Dublin is making its first foray in the realm of open-access digital teaching with a free history course going online in September.

The six-week MOOC (Massive Open Online Course) is aimed at giving people a “Trinity education experience” without having to attend the university.

MOOCs are growing feature of higher education internationally, and new report has called for greater co-operation between institutions here to avoid Ireland falling behind in the digital space.

The Trinity course, “Irish Lives in War and Revolution: Exploring Ireland’s History 1912-1923”, has been designed by staff at the school of histories and humanities.

Dr Anne Dolan, one of the team involved, said it was aimed at the “interested punter” rather than the professional scholar but would not compromise on quality.

Trinity’s partners on the project FutureLearn – a private company owned by The Open University in the UK – told them “people stop watching online after eight minutes and that dictates what you can do in terms of introducing a considered approach. Ultimately, people will get out what they put into it.”

Her colleague Prof Ciaran Brady said taking the MOOC “should prepare you to do a university course” but it was “not a substitute”. One thing they were keen to do was show “how historians actually work” by presenting contradictory evidence and analysing source material.

Thus, he said, “there will be less face-time with ‘talking heads’ and more of ‘Here are the problems, and how do you deal with it?’ We want to avoid saying, we have all the answers.

“We are not planning to dumb down,” he added. “One thing we are trying to do in university is encourage more independent thinking and this kind of project can help towards that.”

Participants will be able to experience short lectures, using audio-visual material, directing them to further online resources. It will incorporate tests and quizzes and students will be encouraged to debate the material on social media.

With potentially thousands of people signing up, “it’s beyond the scope of someone to respond individually to every learner,” said associate dean for online education Prof Tim Savage, who is overseeing the project, “but there is scope to monitor interactions and contribute to that.”

Describing the course as a learning process for Trinity, Prof Savage said: “My personal view is if you want to be a university of global consequence in a globalised educational space you have to have an online offering, and also make sure whatever we are learning in the online space is fed back into the traditional space.

“The pilot is there for us to learn our capacities. The challenge is to take a Trinity education experience and put it online.”

While the course is free, FutureLearn will give people an option of purchasing a “statement of participation” for about €30.

Such statements have proved popular on some MOOCs as they allow employees to “demonstrate a commitment” to a particular field of study, Prof Savage noted. In future, “it’s possible they could be used for people applying for courses” but at the moment there was no formal recognition, he stressed.

The number of universities in the US providing MOOCs has increased rapidly since 2012 but innovation here has been much slower to materialise.

In its latest progress report, the National Forum for the Enhancement of Teaching and Learning in Higher Education has called for a national road map for building digital capacity that would be supported by investment in new technology.

“It is not a question of whether or not digital technology will transform Irish higher education, but rather it is a question of who will lead that transformation. The current approach to building digital capacity in the sector is not cohesive sustainable, or sufficiently evidenced-based,” it said.

One of its recommendations is adopting open education as a core feature of third level institutions. “At the heart of open access is the free availability of information - but the key challenge is managing that information… and facilitating their sound pedagogical value.”

The Trinity MOOC has a particular focus on how ordinary Irish people experienced the events of the last century, and was part of a larger online project planned for 2016 exploring “whether we really gained independence”, said Prof Brady.