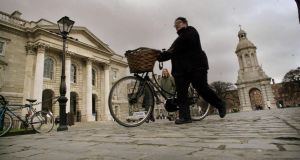 Trinity College Dublin. In a statement, the college said it regretted the letters to academics and said at no stage were they intended to influence the response of the recipients. Photograph: Dara Mac Donaill

One of the main producers of world university rankings has accused Trinity College Dublin (TCD) of violating its rules by influencing academics involved in its annual survey.

Earlier this year, TCD sent out “awareness” emails to academics, advising them of reputation surveys which would be sent out by ranking agencies QS (Quacquarelli Symonds) and Times Higher Education.

A letter by John J Boland, vice-president and dean of research, also provided a link showing how academics could sign up to become reviewers for the QS survey.

University rankings are considered vital to attracting international students and research funding. However, in recent years Irish universities have been sliding down these league tables.

In a statement, QS said it had been made aware of “misguided and naive” communications from TCD which appeared to contravene guidelines aimed at protecting the accuracy of its university rankings.

“We will be reviewing the TCD case and discussing the potential consequences with our advisers over the coming days, before further engaging with the institution directly to discuss the potential outcomes of our enquiry,” said Simona Bizzozero, head of public relations for QS.

“We think that the saddest part of this affair is that a prestigious institution such as TCD felt the need to execute such a campaign, overlooking the potential damage to its otherwise solid reputation as a world top-100 university held in high regard around the world,” she said.

In a statement, TCD said it regretted the letters to academics and said at no stage were they intended to influence the response of the recipients.

It said it regularly provided updates to the wider Trinity community, including alumni, employers and academics with whom it has an ongoing relationship, on its successes and achievements.

“Our letters were sent in good faith and called for participation in the surveys. At no time were they intended to influence the response of the recipients. We regret that our communication with our community on this matter has caused any concern.

“At all times, we respect the integrity of the rankings agencies in their collation of data in informing the annual global rankings,” TCD said.

TCD said the Times Higher Education ranking agency confirmed that it had no issues with the emails sent by the university, though it did not reference QS’s response in its statement.

QS said the last time there was an issue over attempts to influence its rankings was in 2013, when UCC was accused of trying to recruit people from other universities to vote in its reparations survey.

The rankings agency said it changed its policies on foot of this and clearly stated its rules regarding communication on it website.

“No such breaches have been reported since. The integrity of our work is of paramount importance to us. Fair play is a cornerstone of our work and we expect it from our stakeholders,” a spokeswoman said.

Ireland’s highest finish was achieved jointly by TCD and UCD, who secured 31st place for nursing and veterinary science, respectively.

Both universities took most of Ireland’s top-50 places.

University rankings: Irish in the top 50