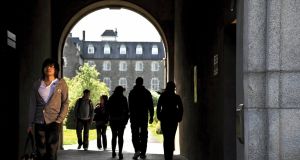 Maynooth University ranked the best of the Irish universities (68th place) in the “Times Higher Education” 150 under 50, which ranks colleges that have been established in the past half century

The Times Higher Education “150 under 50” ranks colleges which have been established in the past half century.

Maynooth University ranked the best of the Irish universities (68th place), followed by Dublin City University (79th place), and University of Limerick (between 101 and 150th).

Overall, the rankings are dominated by Asian and European universities, challenging the traditional grip held by the US and UK.

Universities based in the US and UK occupied just three of the top 40 places and 30 places in the overall rankings, respectively.