Inspired by actor Alan Alda’s success with US scientists, a UCD workshop helps researchers find new ways to talk about their work 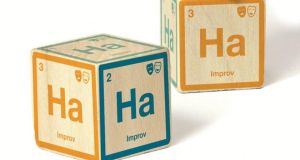 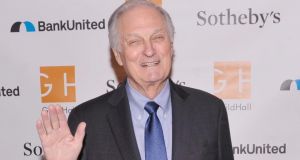 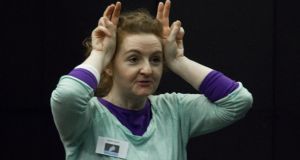 Straight Talking Science workshop at UCD, which aims to help academics talk more engagingly to audiences about their work

It’s a Thursday morning and 20 academic researchers are in a room, concentrating. There’s nothing unusual about that, but this time they are not at a conference or in a library. Instead they are standing in a circle on stage, playing games that might be more in keeping with a children’s party.

They fling balls at each other, they pass imaginary objects between themselves and they gesticulate at each other while chanting. “This is madness,” laughs one as the games grow more and more animated. Madness it may be, but there’s method in it.

We’re at University College Dublin for Straight Talking Science, a training session for researchers in the art of “improv” or improvisation, which relies on spontaneity and no script.

The aim? To try and switch them out of their academic heads and help them to talk more engagingly to audiences about their work. “Improv is play,” says Dr Niamh Shaw, who is issuing instructions about chanting and ball flinging to the trainees. “It’s basically about opening your mind and allowing yourself to accept everything.”

An actor and performer, Shaw is part of The Craic Pack improv group but her background is in engineering and science, and she reckons improv is a good way to change perspective. “As academics we tear things apart, we say ‘no but’, and that’s how we feel is the most honest way of looking at data,” she says. “But this method is saying let’s look at it as a ‘yes and’ – and that is why it complements it so well.”

Improv and the scientists
Improv training for scientists has come into the spotlight recently thanks to actor and writer Alan Alda, who runs sessions through the Alan Alda Center for Communicating Science at Stony Brook University in New York. “It’s rarely done [with scientists], though I sense it is being done more and more,” says Alda, whose experience interviewing hundreds of scientists for the Scientific American Frontiers series sparked the idea.

“I realised that the conversational approach to interviewing that we had really brought out the human qualities of the researchers,” he says.

“I just listened to what they said and asked them questions because I was trying to understand their work. And if I didn’t understand, I would badger them until they could make it clear to me, so that they stopped lecturing and they started really communicating.”

But how might they do that when an engaged interviewer isn’t there? Enter improv. “I remembered what improv had done for me not just as actor but as a person – it made me more available to people,” says Alda. “So that is when I experimented with improvising with scientists and the results were extraordinary, they really opened up and had a much better time talking to audiences.”
Getting personal
Alda’s work inspired the UCD Science Expression programme to give it a go, and at the workshop last week Shaw and Gaiety School of Acting director Patrick Sutton got the researchers to play word association games, to talk like an expert about any subject – butter, mindfulness, tofu, funding research, lino – and, above all, to find the personal in every tale.

“People want to hear a story, to find a way in, a touchstone,” Sutton advises. “If you have a story with a personal resonance, you can’t fail to get a result.”

The result in this case? A barrage of new ways for the researchers to talk about their work. Dr Erin Williams, who looks for new biomarkers of infection in cattle, relived the time she and a friend jogged around a field together and how she got quickly out of breath, but her effort was nothing compared to the hard work that dairy cows do to produce milk for commercial use.

“You might think a dairy cow is just standing around chewing the cud, but it is running a marathon inside that mammary gland,” she said.

“This means the immune system tends to be left out and it can be a path to ill health, so we are looking for new ways to diagnose infections early.”

Dr Amir Tabakovic recalled being at a roadside wearing a high-viz jacket “that could be seen from space” and even still he was almost run over by a truck.

He started to think about how road maintenance could be improved using more remote methods, and he will soon start work on engineering “self-healing” asphalt.

Dr Aoife Gowen, who researches how water’s chemistry alters when it interacts with surfaces, spoke about hyperspectral imaging, which she uses to analyse the chemical makeup of a material or object. She leant on an awkward dining experience in Japan to explain how the technology could be used on mobile devices in the future.

“I’m a vegetarian and I don’t read Japanese, so when I went into a local restaurant I looked at the pictures on the menu,” she recalled. “I picked something that looked like vegetables but when I got the food and bit into it, I realised it was chicken. Maybe in 10 or 20 years time when I go back to Japan I’ll have a hyperspectral camera-phone to tell me what the food is before I eat it.”


Alda’s game Helping scientists communicate
In a word association game, if I were to say “Alan Alda” to you, how would you respond? Hawkeye? M*A*S*H? The West Wing? How about “science communication”?

In recent years the actor has been working with scientists, using improvisation to help them relate to audiences more effectively about their work.

“The basis of the improvising that we do is not to encourage them to be clever or funny, which is how most people think of improvising, but rather to put them in contact with the person they are playing the improv games with,” says Alda, who is Visiting Professor of Stony Brook University’s school of journalism.

“ It even affects the way they write – as they are writing they think of what the reader is going through in his or her head and they can track that, so they don’t just spray information all over the reader.”

And it’s not just the scientists and their audiences who benefit, according to Alda. “I have always learned from the scientists I have interviewed,” he says. “And I have become a better communicator, I think, since I started working on this.”
Claire O’Connell