There is more wrong with Irish childcare than the cost 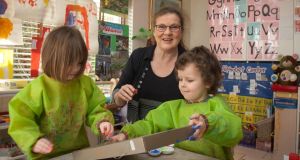 ‘Sand,” says Jamie (4). “I like to play in the sand. And we pick up the pebbles in the garden and then we count them. I like that, too.” Jamie was not as happy in his old creche, although he is a little too young to understand why.

But his parents, Barbara and Keith, know why. Their son had been attending a large, private childcare facility in south Dublin. “All too often we would drop him in the morning to meet a complete stranger in the room, as last week’s minder had decided to pack it in,” says Barbara. “We were rarely, if ever, introduced to new minders. The chopping and changing is very unsettling for young kids. There were staff shortages and minders in rooms with far too many children.”

He has since moved to a new creche. “They are all doing their best, but operating on limited resources,” says Barbara. “People do sometimes resent handing out so much money for childcare when the services can fall short of expectations. I would love to have the option to work part time while my kids are so young, but I need to work for the remaining few hundred euro from my salary after childcare costs to cover the mortgage.”

Childcare has emerged as a key issue in this general election. Politicians of all hues say it is coming up frequently on the doorsteps, and all the major parties either have policies or are formulating them.

The focus, however, has been on the cost of care rather than the quality. This is despite abundant evidence that children who experience high-quality early-years education have significantly better long-term educational outcomes and are more skilled socially.

The early-childhood curriculum, Aistear, which can be applied across all the models of childcare, such as Montessori and Waldorf, is recognised as world-class, as is the set of quality standards that supports it, Síolta. The problem is that there have been insufficient resources to allow these programmes to develop to their full potential.

“There hasn’t been a huge focus at government and policy level on early-years education,” says Ciairín de Buis, chief executive of StartStrong, an advocacy organisation that campaigns to improve the quality and provision of early care and education. “That has been changing since the introduction of a free preschool year, which has had an uptake of around 96 per cent.”

Advocacy groups say the State is taking the right steps, but not enough progress has been made and there is no guarantee that the next government will honour the commitments made.

Quality audits have recently begun, but the introduction of mandatory qualification levels, which would improve the quality of education, has been delayed.

About 12 per cent of people working in the sector are graduates, and the European Union wants to see this figure increase to at least 60 per cent. But why would anyone slog through three years of college to enter an industry with poor working conditions, high levels of responsibility and minimum-wage pay?

“It is a big challenge to professionalise the sector,” says de Buis. “There needs to be good working conditions and salary scales. There needs to be a chance for career progression. People also need to know they will be employed all year round and not to have sign on over the summer.

Unusually, both the Irish Congress of Trade Unions and Chambers Ireland, which represents chambers of commerce across the country, agree on both the need for investment in early-childhood education and the need to improve working conditions in the sector.

A significant number of other organisations are on board, including lone-parent group One Family, various nationwide childcare committees, Early Childhood Ireland and Barnardos.

Heino Schonfeld is the early-years development project manager at Barnardos, which is running RiseUp, a campaign to end child poverty and inequality. He has put his own three children through early childhood education.

“We needed care because my wife and I were working, but at the same time we were aware that the quality of provision is important. Children learn different things at different ages, with the brain rapidly developing between the age of zero and six,” he says. “They develop a predisposition to write and use numbers, to understand science, to explore the world around them. There are windows of opportunity there and it takes skilled childcare experts to recognise these windows and support the child’s learning.”

Nóirín Hayes, a visiting professor in developmental psychology at Trinity College Dublin, suggests that we are still in transition from a time when the home was the main environment for most young children, with networks of siblings and parental support.

She says there is still not enough awareness of the importance of early-years education. The investment and concern was to build and provide places but the quality of care and education was sidelined.

The result is that children who do not have a positive and enriching experience in early years lag behind their peers. Children from disadvantaged backgrounds and Traveller children are disproportionately affected for the rest of their lives.

“It’s not about reading, writing and arithmetic,” says Hayes. “It is about quality learning experiences in interesting, stimulating environments, building up their curiosity, perseverance, problem-solving and interest in learning. We need to address it.”

A CHILDMINDER’S PERSPECTIVE: ‘PARENTS SHOULD BE GIVEN MORE CHOICE’

“I’m a childminder. I take six children into my home every morning. I generally let them free-play. We play, we sing songs, we go into the garden. The children learn to interact; they learn social and emotional skills and how to get along with each other. I have different kids with different abilities and different interests, including some with additional needs. We’re not teaching them their ABCs, or how to count, but we are getting them to focus and concentrate, and to gain more independence and do things for themselves. As a childminder, I don’t have access to grants or state-supported training; the focus remains on the big childcare centres. It makes no sense. Parents should be given more choice than this.”

ELECTION TIME: WHAT THE PARTIES ARE PROMISING