Move to school-based assessment could be negative for student outcomes, TUI says 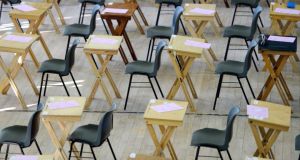 The Teachers’ Union of Ireland (TUI) has expressed deep concerns that proposed Junior Cert reforms would be “negative” for students.

The union said it was worried about the resources needed to introduce the reforms and shift to school-based assessment system, TUI education officer Bernie Judge said today.

The changes, first announced two years ago, are scheduled to begin on a phased basis next year for first examination in 2017. A single, terminal exam will be replaced by courses in areas such as computer design and physical education.

The concern by the union representing vocational and community teachers comes after the Association of Secondary Teachers Ireland (ASTI) said yesterday it was concerned that “the motivation for students will deteriorate” with the changes.

Ms Judge said the TUI was not opposed to the changes.

“The difficulties rest in the resources and capacity to implement reform of the nature and magnitude suggested in context of the current environment where additional resources that will be necessary cannot be provided for schools and teachers,” she told RTÉ Radio.

The move from an external assessment system to a school-based model was of concern because of increased work for teachers and student outcomes, she added.

While resulting increased workload for teachers was a “major concern” it was “not the only concern”, she said.

With the new assessment system there was a “lack of capacity across all schools at an operational level and an administrative level in terms of teacher time and technical expertise,” she added.

Ms Judge also suggested the new system may put pressure on students “in a different way”.

She said she was worried about the additional workload which “may have a downside in the long-term on students”.

Ms Judge said she wanted the State to provide additional teachers for planning and processing the changes as well as increased expertise.

“We are not confident next autumn is the right time” to begin rolling out the curriculum, she told RTÉ’s Morning Ireland.

Association of Secondary Teachers Ireland (ASTI) general secretary Pat King said yesterday the abolition of the Junior Cert would leave students with no State examination before the Leaving Cert.

He said that while teachers liked some of the proposed changes, they were concerned that “the motivation for students will deteriorate and . . . that what is being proposed will change the relationship between students and teachers”.

Mr King said teachers wanted to be advocates for students, not their judges, and believed in an external, independent, objective evaluation of work.

Minister for Education Ruairí Quinn said he was asking teachers to get involved in an assessment for learning and of learning. “Teachers are doing this in other countries around the world and it is having satisfactory results.”

Earlier on RTÉ’s News at One, Mr Quinn insisted current resources were sufficient for the phasing in of the new structures. However, he added, “we can make more resources available should that prove to be necessary”.