Unions say they ‘remain resolute in opposition’ to school-based assessment 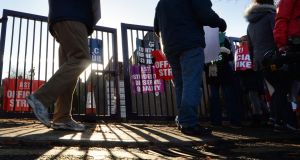 Teachers are set to strike after failing to reach agreement in talks over reform of the Junior Cycle. Photograph: Cyril Byrne/The Irish Times

Talks aimed at averting a teachers’ strike next week have ended without progress.

More than 730 secondary schools are due to close on Thursday, January 22nd in the second day of strike action over plans to reform the junior cycle.

In a statement, the two unions representing secondary teachers, the ASTI and TUI, said “there remains a considerable difference” between their position and that of the Department of Education.

“The unions reiterated their principled position in relation to external, state certified assessment and the capacity at system and school level to accommodate the changes proposed,” the unions said.

“It was stated that teachers support a first class junior cycle for all students, including a move away from a reliance on final written examinations and the promotion of different types of assessment, including more practical, project and portfolio work.”

However, the unions said, “we remain resolute in our opposition to significant elements of the proposals, a position overwhelmingly supported by 27,000 second level teachers.”

Minister for Education Jan O’Sullivan says she has already made major concessions to the unions, including the restoration of state certification and reducing the proportion of grades to be assessed by teachers from 100 per cent to 40 per cent under the new Junior Cycle Student Award.

Her stance has been supported by the National Parents Council Post Primary and a range of educational stakeholders. However, Opposition parties have criticised what they depict as the Minister’s intransigence.