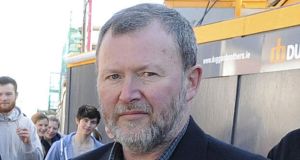 Teachers and lecturers may take strike action unless they are paid equally, regardless of when they began in the profession, following a decision taken on the first day of the Teachers’ Union of Ireland (TUI) conference in Wexford.

Barry Williams, a lecturer at IT Tallaght, said it was deeply unfair that teaching staff appointed from January 2011 and from February 2012 were paid less than colleagues who began in the profession before them.

“They couldn’t take from existing teachers, so an opportunist Government decided to dip into the hands of public servants who hadn’t even been appointed yet. This union remained silent and we let young teachers and lecturers down,” he said.

“This is a problem affecting second- and third-level teachers at every pay grade and in every workplace.

“It is a basic inequality and the option for strike action will strengthen our position.”

William O’Halloran of the TUI executive added that “austerity is over and this austerity measure must be wound back”.

TUI officials will now escalate their campaign by raising the matter at the Irish Congress of Trade Unions.

The union will also continue a campaign to abolish the public service pension levy and restore teacher pensions to pre- 2004 levels.

it was an extra tax targeted at one sector of society and that was “blatantly and grossly inequitable”.

“ESB workers and employees at the Irish Greyhound Board and Horse Racing Ireland have been exempted. We would be more fairly treated if we were preparing horses for stud and dogs for racing than we are when we work to prepare students for examinations.”

a permanent teacher who works in her school, with seven years’ experience, who was told she would be entitled to a pension of €11,000 a year after 40 years’ service. “This is surely income poverty,” she said.

Earlier, TUI general secretary John MacGabhann said it appeared there would be some modest increase in income for public servants but he expected teachers to be told they should not expect much.

“Bankers and speculators are once more admitted to polite society, but no such generosity or understanding will be directed towards those – including many of our members – whom the inequality in our society, the ravages of recession and the obscenity of poverty have pulverised,” Mr MacGabhann said.