Recently recruited teachers to get pay boost of €2,000 on phased basis over next year or so 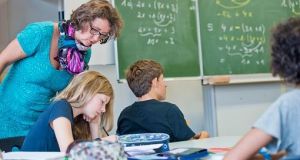 The deal on teachers’ pay finalised on Friday reinforces the pay gap that is emerging between teachers in different trade unions as a result of their stances on the Lansdowne Road agreement. File photograph: Getty Images

The deal on teachers’ pay finalised on Friday is in effect aimed at ending the controversial two-tier pay structure in many schools.

However, it reinforces the pay gap that is emerging between teachers in different trade unions as a result of their stances on the Lansdowne Road agreement.

The various teaching unions have been very effective over the last year or so in highlighting what they saw as serious inequality arising from the two-tier pay scale system in operation in the education system over recent years.

In essence, the two-tier system largely dated back to the decision by the previous Fine Gael-Labour coalition to abolish qualification allowances for teachers recruited after early 2012. Unions said this measure left young teachers up to €5,000 worse off compared with their counterparts employed before 2012 for doing the same job.

Teachers and other staff recruited across the public service after 2011 also had pay rates cut by 10 per cent.

The unions’ campaign against the two-tier system painted a picture that was simple to understand. It put pressure on the Government to address the issue not just for teachers but also for other groups in the public service such as recently recruited gardaí who, for example, lost out on rent allowances.

However, the Government was determined to ensure that any ending of the two-tier system was achieved in a manner that did not threaten its entire public service pay policy, centred on the Lansdowne Road agreement.

A formula was found in a deal reached with firefighters in the dying days of the previous administration last May.

A new single-tier pay scale for firefighters - effectively reversing the abolition of allowances for post 2012 entrants - was to be put in place subject to their union backing the Lansdowne Road accord and agreeing to implement productivity reforms.

The TUI, which represents teachers at second and third level, and the INTO, the union for primary school teachers, entered talks with the Department of Education and the Department of Public Expenditure during the summer on the issue of pay for members recruited after 2012.

Those discussions ended with the deal announced on Friday which will see recently recruited teachers in both unions receive a pay boost of €2,000 on a phased basis over the next year or so. The agreement will cost about €20 million.

The deal is contingent on the introduction of certain reforms. These include a review of school structures and posts of responsibility, including removing seniority as a stand-alone criterion.

However, Irish Times education analyst Brian Mooney said on Friday that under the proposed reforms, any teacher who had been following best practice and professionalism and who had been engaging in whole school care structures would not have to do anything different than they had been up to now.

The new deal widens the pay gap that has been emerging between members of the TUI and ASTI - in many cases working side-by-side in the same schools - as a result of their differing stances on the Lansdowne Road accord.

The Government considers that the ASTI has repudiated the Lansdowne Road deal and invoked financial emergency legislation to impose financial penalties on its members.

While TUI members will receive the new €2,000 pay boost (if recruited after 2012), they will also get a payment of nearly €800 this year for carrying out supervision and substitution payments, as well as their regular increments.

Members of the ASTI, on the other hand, will forfeit incremental pay rises when they fall due (these can be worth up to €2,000 in some cases) and will not receive either the payment for supervision and substitution or the €2,000 under the new-entrant deal announced on Friday.

Members of the ASTI are currently balloting for industrial action on a number of issues including on the two-tier pay system.

It remains to be seen if the deal announced on Friday has any impact on the views of ASTI members as they cast their votes.