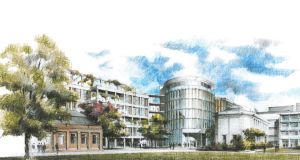 Trinity College Dublin is planning a further rejuvenation of its Pearse Street facade with the development of a new business school and student residences.

The university has announced plans to demolish Oisin House, currently occupied under lease by the Department of Social Protection, and construct a new student accommodation block with up to 350 units.

It is one of several Pearse Street buildings owned by the college which have been earmarked for redevelopment. Farther along the street, close to the railway bridge, some Georgian houses will be refurbished to incorporate Trinity’s new school of business.

The €70 million development will be centred on the campus’s existing Luce Hall, and will face towards College Park with another entrance at Pearse Street.

Designs are to be lodged shortly with Dublin City Council for the development, and the college hopes to complete the build by 2017, along with the Oisin House development, for which a design team is being recruited.

The university had drawn criticism over the years for allowing a number of Pearse Street buildings to become dilapidated. Since 2007, however, it has opened the Crann building (Centre for Research on Adaptive Nanostructures and Nanodevices), the Science Gallery and the Trinity Biomedical Sciences Institute.

Provost Dr Patrick Prendergast said the strategic plan would involve enlarging what has become “the tech part of the campus”.

“Pearse Street is becoming in a way Trinity’s street in the city, and I like that idea. Pearse, of course, was himself a great educationalist, and maybe there’s something in that.”

The college is seeking to provide an extra 2,000 units in all “with the aim of addressing the challenges students face in securing quality accommodation for the duration of their studies at Trinity”.

Under the accommodation plan €170 million would be invested, creating 300 jobs a year for five years.

The business school is costing €70 million, and is part of a €295 million capital investment plan that would create 600 jobs in the construction phase.

Trinity is seeking to meet the cost through a mix of exchequer funding and philanthropy.