Students urged not to choose courses ‘solely on CAO points’ 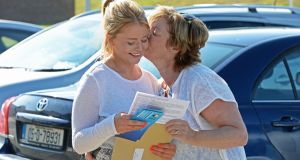 Students seeking to enter third level education should do the course they have the capacity for and not one solely dicated by the CAO points they achieved, the head of the Higher Education Authority has said.

Chief executive of the HEA, Tom Boland, said students and their parents shouldn’t be “overly alarmed” at the rise in the points required for some courses.

The first round of CAO offers for third-level places was made on Monday. The number of degree courses requiring 500 points or more has risen by more than 25 per cent.

Business studies, engineering and law are among the biggest movers, while points for science were up at all universities with the exception of UCD and Trinity College Dublin, where they dipped slightly.

Mr Boland said all the universities were moving to a “much broader approach” to entry. They were also cutting down on over-specialisation of courses, except where it was “absolutely necessary from an academic point of view”.

“They have all agreed to do it, although I would have to say that the pace at which is is happening varies across the sector,” Mr Boland said.

UCD had for quite a long time had a broader entry to its science programmes and Maynooth was also moving forward with this, he added.

The other institutions had agreed to do so but it would take a couple of years to “unwind the level of specialisation that has happened over the last number of years”.

Asked whether the rise in points was solely about “prestige” for the colleges, Mr Boland said performance in the Leaving Certificate was a very good predictor of performance in higher education.

Mr Boland added that there was a “curious dynamic” between students, parents and colleges.

“There’s a sense, a concern, that you shouldn’t ‘waste’ your points and that if you are getting 500 points you should do a 500-point course.

“That in turn would appear to have driven some of the behaviour in the colleges towards bringing the points up in the courses through the process I mentioned of over-specialisation.”

He said students should take advice from parents, friends and teachers.

“Do the course you have the capacity for – the points will look after themselves at this stage.”

Clive Byrne, Director of the National Association of Principals and Deputy Principals said some students may be disappointed due to the rise in points.

“But it is important to remember that successful completion of the Leaving Certificate is a great achievement in its own right and even if students don’t attain their first choice, there is a huge array of options available and routes into the careers they wish to pursue.

“I encourage students to consider courses that best suit their skills and interests, rather than opting for areas that may impress family and peers.”

He said students with concerns about their options should consult their teachers or the admissions officers in individual institutions for further advice.

Trinity College Dublin said this year had also seen a “helpful corrective” to recent increases in the points for many courses, some of which have seen a decrease. There had been no change for some other courses.

TCD said 7,876 students had selected the university as their first preference and a total of 18,194 students had applied, representing 23 per cent of the total number of applications submitted to the CAO.

About 3,000 places were being offered to prospective undergraduates.

Dean of Undergraduate Studies Dr Gillian Martin said this was the second year of the Trinity admissions feasibility study. This was an attempt “to see whether it might be possible to develop a better and fairer mechanism to identify and admit applicants with the academic ability and potential to succeed in college”.

“This is an extremely serious issue that is affecting hundreds of students across the country. Universities are effectively using the points system as a marketing tool to make their courses appear more competitive and elusive, and in the process of doing this are shutting eligible students out of their programmes.”

He said the Minister had “made noises about tackling the situation, but the reality is that very little has been done”.