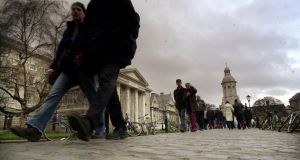 Royal Irish Academy report says that since 2008, the third-level sector has seen a “severe divestment of its funding base”. Photograph: Dara Mac Donaill

A loan scheme for third-level students is urgently needed to arrest a decline in funding and quality in higher education, the Royal Irish Academy has warned.

The RIA, Ireland’s leading body of experts in the sciences, humanities and social sciences, says higher education has lost ground over the past seven years due to funding cuts and rising student numbers.

It estimates that higher education requires an additional €100 million annually over the next decade just to maintain current standards.

The report says that in the period before the economic crash, the higher education system was beginning to emerge as a “respectable and competitive system” which featured reasonably well in international rankings.

However, since 2008, the sector has seen a “severe divestment of its funding base”.

“It is the belief of this submission that although the system has performed well due to the efforts of committed staff and ambitious leaders, quality has indeed suffered and would continue to suffer in the face of rising student numbers and dwindling resources,” the report says.

The capital budget for higher education has been cut by 85 per cent since 2008, while student numbers have increased by 25 per cent.

In a policy paper to be published this week, the RIA says the expansion of third level should only be considered if the student/staff ratio can be maintained. The cost of injecting more funding into higher education needs to be spread across the public, student and other private sources. A loan scheme is needed as a matter of urgency to ensure no student is barred from accessing education because of inability to pay upfront.

The report also says the €3,000 student contribution charges could be replaced with a new student fee and support mechanism.

Of all the possible loan schemes, the report says an income-contingent scheme seems the most equitable. This would ensure students only begin to repay loans once their income reaches a certain level.

Students should be given the option to borrow to cover living costs associated with participating in higher education.

The paper says the Government should also provide additional funding, along with private enterprise which benefits from the provision of skilled graduates.

It proposes that, over the long term, colleges and universities should be allowed to operate an annual surplus which could be used for infrastructural maintenance and, if high enough, to service borrowing for new buildings.

It also calls for an increase of up to 30 per cent in academic staff to restore a staff/student ratio of 16:1.

“This does not imply simply reverting to conditions in 2008,” the paper says. “Further growth in student numbers should only be considered following this adjustment and only if the student/staff ratio can be maintained.”

The developing further education sector should be brought together with higher education under a “tertiary education umbrella” to find greater efficiency in the use of public resources.