Student fees plan is ‘an attack on the right to education’ 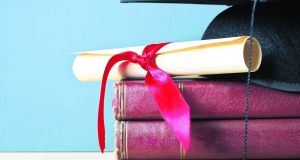 A proposed increase in third-level fees to more than €4,000 a year would deter people from poorer backgrounds from attending college, critics have said. File photograph: ThinkStock

A proposed increase in third-level fees to more than €4,000 a year would deter people from poorer backgrounds from attending college, critics have said.

Responding to the recommended increase in a draft report on tuition fees, the Anti-Austerity Alliance (AAA) said the move would represent an “attack on the right to education” and open the door to further hikes.

The report, carried out by Peter Cassells for Minister for Public Expenditure Paschal Donohoe, says increasing fees to €4,000 a year will not be enough to solve the funding shortfall in the third-level sector.

The report then says student contributions should be raised even further.

It recommends a student loan scheme “with the current €3,000 charge being converted to a €4,000 fee that is repayable when the student enters paid employment above a certain income level”.

In response, AAA TD Mick Barry said: “[It] is the latest in attempts by governments to fully remove the ‘free fees’ model and to return to full fees.

“An increase in student fees to over €4,000 a year, whether paid up front or through a loan scheme, would act as a major barrier to many young people being able to access education.”

A student loan scheme would be the return of full fees through the back door, he said.

The AAA said the prospect of being saddled with debt for 15 or 20 years will act as a major disincentive for people to attend third-level education.

“Prospective students will question whether it is financially viable for them to continue their education to third-level when they consider that their future will entail a period of unemployment, labour activation measures or low-paid work.”

Sinn Féin said it would fight the proposals that would “restrict access” to education.

The party’s spokeswoman on education, Carol Nolan, has called for the publication of Mr Cassell’s report.

Ms Nolan said: “Students preparing for their Leaving Cert examinations in a few short weeks will be alarmed to read the reports in today’s newspapers in respect to student fee increases.

“The previous government has presided over complete chaos in respect of third-level funding, which has now reached crisis point.”