Standing ovation for Minister as she defends Sligo college staff 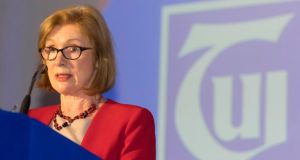 Minister for Education Jan O’Sullivan: “I firmly believe that staff and their unions should have the right to be consulted and provided with information on any proposed changes to their employment.” Photograph: Patrick Browne

Minister for Education Jan O’Sullivan has backed demands by staff at St Angela’s College, Sligo, to be consulted directly in talks on their merger with NUI Galway in an intervention that received a standing ovation at the TUI conference.

Ms O’Sullivan told delegates, “I firmly believe that staff and their unions should have the right to be consulted and provided with information on any proposed changes to their employment.”

She said her department had written to St Angela’s College and NUIG and “we have made clear that there should be direct engagement with TUI on industrial relations issues arising from the proposed incorporation”.

Longer-serving delegates said it was the first time they had witnessed a Minister getting a standing ovation at a teachers’ conference.

In his address, TUI president Gerry Quinn noted the Minister had previously announced plans to send a copy of the Proclamation to all primary schools and suggested one be sent to NUIG.

The TUI has already held one day of strike action at St Angela’s over the perceived downgrading of staff grades from lecturers to “university teachers”. A second strike date is planned for April 16th, with lunchtime protests at all institutes of technology in support.

In a statement, NUIG said the due diligence process necessary for the finalisation of a full incorporation had been given an urgent impetus.

“It will therefore be possible sooner than previously expected, to meet with TUI officials and other union officers on incorporation matters of direct reference to the unions and their members. This could be achieved in a matter of weeks,” the statement said.

Ms O’Sullivan told reporters later that it would be unfair to applicants “to turn around and change the rules at this point”.

However, he stressed, “whatever issues the unions want to raise in negotiations is a matter for them”.